Creators
King, William Lyon Mackenzie, Recipient
Bezeau, C. Mortimer
, Author
Media Type
Text
Item Type
Correspondence
Description
Typewritten letter from C. Mortimer Bezeau to William Lyon Mackenzie King on April 4, 1930. Bezeau commends King for his actions in parliament regarding unemployment and continues to criticize the Conservative party position.
Notes
William Lyon Mackenzie King (1874-1950) was Canada's longest serving Prime Minister with a total of 22 years (1921-1930 and 1935-1948). King was born in Berlin, Ontario (present day Kitchener) on December 17, 1874. He graduated from the University of Toronto and went on to study economics at Harvard and Chicago University. In 1900 King was named Canada's first Deputy Minister of Labour, and became Minister of Labour in 1909. In 1921 King was elected Prime Minster of Canada. King was a member of the Liberal Party of Parliament for over 30 years, 22 of those years were spent as Prime Minister of Canada. William Lyon Mackenzie King died on July 22, 1950 in Kingsmere, Quebec.

As I understand your statement in the House of Commons regarding Federal unemployment relief to the provinces, you had in mind the fact that the Tories are trying to make political capital out of the present industrial situation; and that any assistance given by your Government to a Tory Government for the relief of the unemployed would be looked upon by the Tories as an endorsement of their claim that the Federal Government is responsible for any unemployment that exists in Canada at the present time, and would be used by them as ammunition to further their propaganda. As usual the Tories have torn part of a sentence from its context and given it a construction which the context does not warrant.

I know you are very busy at this time – too busy to read all I might say on this matter. No doubt hundreds of others are writing you on the same subject. Sufficient for me to say at this time that I heartily endorse what you said on the matter. 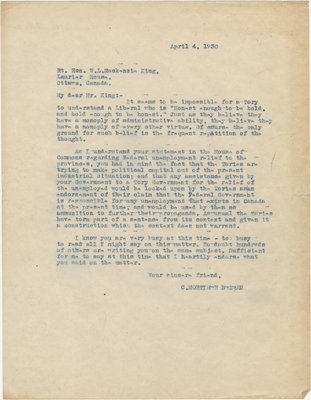