Additional words handwritten in pencil by C. Mortimer Bezeau.
Notes
William Lyon Mackenzie King (1874-1950) was Canada's longest serving Prime Minister with a total of 22 years (1921-1930 and 1935-1948). King was born in Berlin, Ontario (present day Kitchener) on December 17, 1874. He graduated from the University of Toronto and went on to study economics at Harvard and Chicago University. In 1900 King was named Canada's first Deputy Minister of Labour, and became Minister of Labour in 1909. In 1921 King was elected Prime Minster of Canada. King was a member of the Liberal Party of Parliament for over 30 years, 22 of those years were spent as Prime Minister of Canada. William Lyon Mackenzie King died on July 22, 1950 in Kingsmere, Quebec.

The government is to be commended for its attitude with respect to a number of questions, particularly soldiers’ pensions, and the export of liquor to the United Sates. Apart altogether from the merits or demerits of prohibition, it seems to me that it would be to the advantage of Canada to disassociate itself entirely from the rum-running ring of the United States.

It is common gossip on the street here that “Euler is wild” over your decision to refuse clearances to liquor exports to the United States. About two weeks ago I received word from a fairly reliable source that the local conservatives expect Euler to resign from the government and run as an independent conservative in the next election. It is no secret that he was greatly disappointed over his failure to achieve the railway portfolio. However, I am not in Euler’s confidence, nor is he in mine, so do not know what is in his mind at this time; but it would not surprise me if he does contemplate some such more as that referred to above.

Euler’s chances of re-election as a liberal are far from bright. The determination of Motz to keep the local organization out of provincial politics, and keep [handwritten] it [end handwritten] intact for the benefit of Euler in federal elections, has resulted in the organization’s complete collapse; and any organization for the support of Euler would have very few of the old workers in it. The men who put Euler in parliament are now determined to put him out because of his apparent readiness to barter provincial liberals for tory support in federal elections.

I believe you should know these things to be on your guard. 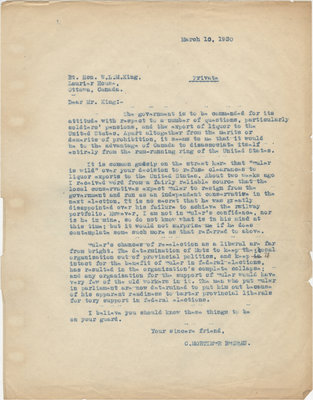