Artist description: This ornate gate leading into Waterloo Park was built in 1901, commemorating the death of Queen Victoria. The gate was eventually demolished because the big tour buses could not make it through. Many times did I ride my bike through this gate on my way to go swimming, running with the track team, listening to the Waterloo band, or to play tennis or go skating. You see, we lived two blocks from the Park.
Notes
The Wilfrid Laurier University Permanent Art Collection cares for approximately 400 pieces by Woldemar Neufeld.

Woldemar Neufeld died on November 24 from complications of Parkinson's disease, shortly after his 93rd birthday.
Date of Original
1980
Image Dimensions
Image Width: 20.7in
Image Height: 13.8in 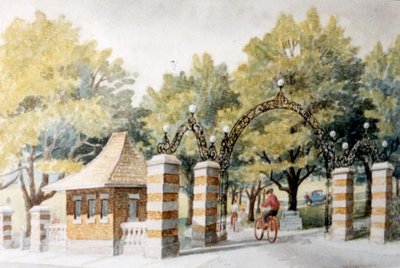