Artist description: A pen and ink drawing of the farm residence of Elden and Mary Hunsberger near Baden, Ontario. This was my home the first eight months of my life in Canada. I arrived on New Year's Eve, 1924. Here is where I was initiated into the new environment and customs of my new country. The windows on the left upstairs was my bedroom. I was sent to a country one room school for four months where I learned English until May when I was taken out of school to help with the spring ploughing. And where I also learned Pennsylvania German. At the end of August I was brought back into the Janzen-Neufeld home in Waterloo where I finished public school.

Woldemar Neufeld died on November 24 from complications of Parkinson's disease, shortly after his 93rd birthday.
Date of Original
1977
Image Dimensions
Image Width: 16.5in
Image Height: 12.2in 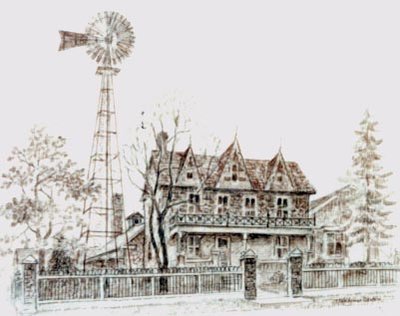