Media Type
Image
Item Type
Photographs
Description
Black and white photograph of the Concordia Choir performing in a studio. Alfred Kunz, Concordia Club Choir director, is conducting the singers. A pianist sits in front of a piano. The singers are dressed in formal wear and the men are wearing suits.
Notes
Alfred Kunz (1929-2019 ) was a Canadian composer, conductor, arranger, choir master, vocal teacher, administrator, and music publisher based in the Kitchener-Waterloo region of Ontario. Kunz was born in Neudorf, Saskatchewan on May 26, 1929 . From 1949-1955 he studied composition and conducting at the Royal Conservatory of Music in Toronto, Ontario. In 1964 he continued his studies in Europe, where he took the choral conducting exams in Mainz and was awarded Staats Exam papers. 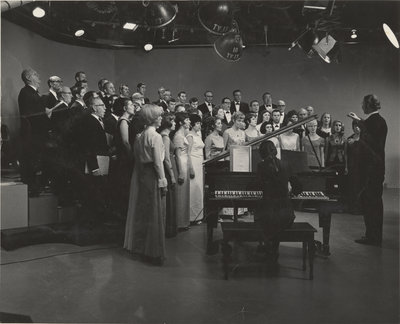