Media Type
Text
Item Type
Documents
Description
Subscription list for the salary of Rev. Hermanus Hayunga, Williamsburg parish, from March 1, 1835 - March 1, 1838. Names of congregation members are listed with their contributions in bushels of wheat, bushels of oats, pounds, pence, and shillings.
Notes
The document is affixed to cardboard. The second page was could not be scanned.

The transcription is attached as a PDF.

Hayunga was born in Charlotte Amalie in 1799 to Bernhard Hayunga and Mary Reuvenhagen, owners of a coffee plantation. Young Herman Hayunga attended school in St. Thomas and was fluent in Danish and French. He pursued studies in Halle, Germany and Oxford, England. In 1820 he accepted a position at Hartwick College in the United States. While teaching at Hartwick he began studying theology, graduating in 1825.

After graduation, Hayunga accepted a call to the parish in Williamsburg Township, Upper Canada. The congregation was without a leader, and without a church building. Their original St. George’s Church was taken over by the Church of England, and the Lutherans were forced to hold services in the homes of congregation members.

In 1833 the Evangelical Lutheran Church of St. John was consecrated by Rev. Hayunga. The new wooden frame building stood on a lot donated by church member Conrad Frymire. In 1863 a larger, brick church was built on the same lot.

Herman Hayunga was married to Elizabeth Barkley, a member of his congregation. He died on April 15, 1872. 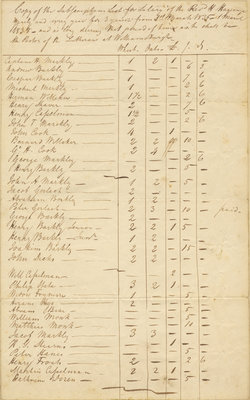