Hayunga was born in Charlotte Amalie in 1799 to Bernhard Hayunga and Mary Reuvenhagen, owners of a coffee plantation. Young Herman Hayunga attended school in St. Thomas and was fluent in Danish and French. He pursued studies in Halle, Germany and Oxford, England. In 1820 he accepted a position at Hartwick College in the United States. While teaching at Hartwick he began studying theology, graduating in 1825.

After graduation, Hayunga accepted a call to the parish in Williamsburg Township, Upper Canada. The congregation was without a leader, and without a church building. Their original St. George’s Church was taken over by the Church of England, and the Lutherans were forced to hold services in the homes of congregation members.

In 1833 the Evangelical Lutheran Church of St. John was consecrated by Rev. Hayunga. The new wooden frame building stood on a lot donated by church member Conrad Frymire. In 1863 a larger, brick church was built on the same lot.

Herman Hayunga was married to Elizabeth Barkley, a member of his congregation. He died on April 15, 1872.

In the Name of God, the father of our Lord Jesus Christ : Amen!

We expect that he will preach Eighteen times yearly and every year, the Gospel of our Lord & Saviour Jesus Christ (agreeable to the Confession of Augsburgh & as the same is now adopted and interpreted by the most

approved Divines of our Church); that he will baptise, instruct and confirm our Children; that he will administer to the Congregation the Sacrament of the Lord's Supper; that he will visit the Sick and perform all other Ministerial acts which a faithful Minister of the Gospel, according to the established usage of our Evangelical Lutheran Churches, ought to perform, And for all which services, We, the Undersigned, the Wardens and Members of the Congregation aforesaid - promise to pay unto the aforesaid Minister the Reverend Hermanus Hayunga the just and Lawful Sum of Twenty Seven Pounds Hallifax Currency - and Fourty Bushels of Wheat and Thirty Bushels of Oats - Yearly and every year so long as he shall be our Pastor.

And it is hereby understood that this Call is intended to be for the Term of Two Years from this date. It is likewise expressly agreed upon by the Parties aforesaid that Funeral Sermons & Marriages are not included in the above Services - but, that the Members who call on the said Minister for their performance will compensate him as follows : for every Funeral Sermon Two Dollars - & Marriage Two Dollars. 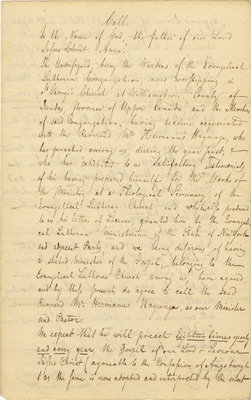