Creator
Hayunga, Herman, Author
Media Type
Text
Item Type
Documents
Description
Handwritten document listing four resolutions passed by the wardens of the Evangelical Lutheran Church at Williamsburg. The resolutions ask the Lord Bishop of Quebec to resolve the issue of church ownership, and empowers Herman Hayunga as their representative. Also includes the minutes of the meeting which was held at the House of Conrad Frymire.
Notes
St. John’s Evangelical Lutheran Church in Riverside Heights, Ontario is a member of the Eastern Synod of the Evangelical Lutheran Church in Canada. It began in the late 1700s as a congregation of settlers in Williamsburg Township, Upper Canada. In 1789 a church building was erected on the Center Commons Lot in the first Concession of Williamsburg Township. The church was originally named Zion Lutheran Church, but the name was quickly changed to St. George’s Church. The first pastor was Reverend Samuel Schwerdtfeger.

The Wardens of the Evangelical Lutheran Church at Williamsburg, having met, pursuant to appointment, for the purpose of Considering the interests and Welfare of their Church, came to the following Resolutions;

Resolved I that they both in behalf of their successors and in the Name of the Evangelical Lutheran Church at Williamsburg, Eastern District Province of Upper Canada humbly petition the Lord Bishop of Quebec to settle the Controversy, which is agitated between them & the Reverend John Gunter Weagant, Missionary of the Church of England at Williamsburg.

Resolved II. That they respectfully submit to the Lord Bishop of Quebec a true statement of the grievances, they have suffered and still continue to suffer from the said Revd John G. Weagant.

Resolved III. That if the Lord Bishop of Quebec deem this subject worthy his attention, they are anxious that His Lordship may personally examine this pending controversy.

Resolved IV. That their present Evangelical Lutheran Minister the Reverend Hermanus Hayunga prepare in conformity with the preceding resolutions, a Petition and a Memorial - addressed to His Lordship the Bishop of Quebec, & that the same be sent as soon as possible.

Memorandum. The Meeting was called by the Revd H. Hayunga. All the Wardens assembled about 6 o'clock PM at the House of Conrad Frymire, one of the Wardens;

The Revd H. Hayunga took the Chair - & officiated at the same time as Secretary;

He opened the Meeting by calling the attention of the Wardens to the afflicting dispensation of Providence which had befallen yesterday their Church. He estimated the damage occasioned by fire ect. - to be great & that perhaps One Hundred Dollars would not repair the Building for fitness of use. He pressed it upon the attention of the Wardens that as they did not know to whom the Church ect. now belonged, it would be better to petition the Bishop of Quebec to settle the existing Controversy between the Lutheran & Church of England Congregation at this place; & that after having obtained due information relative to this point - they should repair the Church, by incurring necessary expenses.

Mr Peter Witteker proposed to repair the church as well as they could by not incurring any expences whatever, so as to be able to hold publick Worship in it, till such information be obtained -

In Witness whereof I have signed this Certificate. 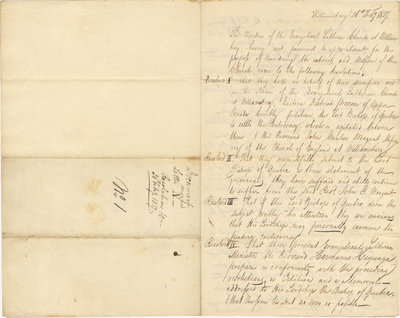