Creators
Haselim, Ernest L., Author
Whitacker, Peter
, Recipient
Media Type
Text
Item Type
Correspondence
Description
Handwritten letter from Ernest L. Haselim to Peter Whitacker on July 23, 1826. The letter introduces Herman Hayunga who had just recently finished studying Theology at Hartwick Seminary. Haselim recommends that Hayunga become a minister for the Lutheran congregation in Williamsburg because Senderling was not willing to leave his present congregation.
Notes
Small tear on the edge of the first page from the wax seal. The red wax seal is still attached to the letter.

The bares a watermark with a fleur-de-lis and the date 1823. The paper also has chain lines which are 2.5cm apart.

in regard to the Settlement

of a Pastor in Willbg

The bearer of this line is Mr Hayunga who has just finished his theological studies in the Seminary entrusted to my charge, who intends to present himself to the Synod at our next meeting Sept 3d at Cobleskill in the county of Schoharie to receive license to perform all ministerial arts. You had intended to call the Revd Mr Jacob Senderling; but his present congregation are not willing to part with him, & being born in the States [strikeout: he] feels an inclination to stay & thinks that he could not be happy under any other government. He writes me, that your congregation had paid him a sum of money to aid him in his travelling expenses which he will send back by Mr Hayunga when he shall see him at the Synod. He would undoubtedly have done it now were the distance not the [illegible] confidenable & the time so short. I can recommend Mr Hayunga to your congregation as a young man with whom I am well acquainted, he having studied with me for 4 1/2 years; & has been tutor in the Seminary for the last year. I trust you will find him a pious & zealous minister of the gospel, who is willing to do all in his power to raise your congregation to respectability, with the blessing of divine Providence; & I think, that in many respects he will suit you better than Mr Senderling, particularly because Mr Hayunga understands both the German & the English languages.

However I hope, that you will not insist on his preaching [strikeout: too] very frequently in the German language, in as much as that would retard the growth of your congregation. I shall be glad to receive by Mr Hayunga [illegible] a line from you my dear Sir; Mr Goertner has informed me of your readiness to assist in the building up of our Lutheran church in your part, & I can assure you, that it is the wish of my heart also, to see the church flourish every where. If God spares my life I am resolved to come & see you next year in the fall to see, whether there are yet other settlements of our people unprovided with the Gospel. This fall I shall visit another portion of Canada on the South west boarder of Lake Ontario, where I found last year considerable numbers of our people. May God direct you in your proceedings & bless your endeavours to aid in building up the Redeemer Kingdom in the sincere prayer of your humble servant & friend

P.S. You may show this letter to the [illegible] of your church - with my respects to them - 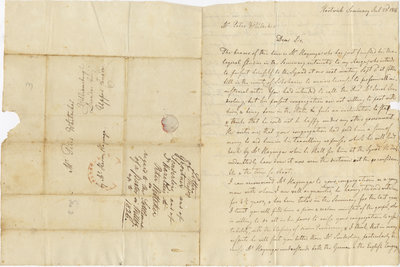