Media Type
Image
Item Type
Photographs
Description
Black and white photograph of the Luther Rally held at the Waterloo Park bandshell during the Luther League of America's 23rd biennial convention. F. H. Knubel, president of the United Lutheran Church in America, is standing at a podium on stage. Choir members are seated behind him. Audience members are seated in front of the bandshell. A banner is strung across the bandshell opening which reads: "Welcome: Luther League America."
Notes
The photograph is affixed to an album page. 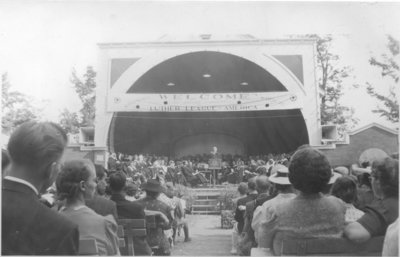