Creator
Griebling, G.E., Photographer
Media Type
Image
Item Type
Photographs
Description
Black and white photograph of Jean Hachborn, president of the Women's Auxiliary of Waterloo Lutheran University, speaking to the crowd at a the Semianary President Portrait Unveiling Ceremony during the seventh annual convention of the Eastern Canada Synod. Mrs. Hachborn is standing in the doorway of the Seminary, with her back to the camera. Some of the men and women in the crowd are looking at programmes. Willison Hall is in the background.
Notes
The eighth annual convention of the Eastern Canada Synod of the Lutheran Church in America was held at Waterloo Lutheran University in Waterloo, Ontario, June 2-5, 1969. 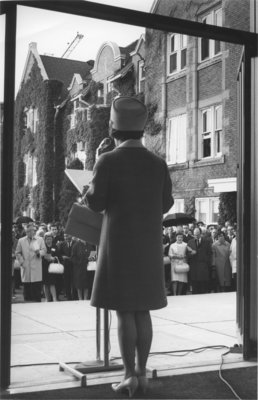