Media Type
Image
Item Type
Photographs
Description
Black and white photograph of a girl and a boy standing at the entrance of Finnish Evangelical Lutheran Church in Kirkland Lake, Ontario. Helen Huktala is standing on the left and Raine Vainio is standing on the right. The children are holding boxes of flowers to present to women attending the Mother's Day service. In the background, a woman is standing inside the church.
Notes
Finnish Evangelical Lutheran Church, located at 22 King Street in Kirkland Lake, Ontario, was a
congregation of the Eastern Synod of the Evangelical Lutheran Church in Canada. The church
was founded on September 10, 1933. Initially services were conducted in Finnish, but eventually
became bilingual (Finnish/English). Many of the parishoners were of Finnish or Estonian
descent. After 80 years of service the church closed on June 2, 2013. 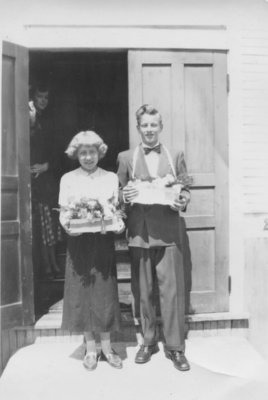