I will have to write you very briefly this morning as I am leaving on the eleven o’clock train from Kitchener for Unionville and Sherwood where I am to preach to-morrow. Since Thursday we have been having real winter weather, not far above zero, and it is still very cold. The cold snap came on very suddenly with a heavy wind storm that fairly shook the house Wednesday night and Thursday morning. Our neighbour Mrs. Prof. Henkel was so frightened that she stayed up all night till 6 o’clock in the morning; but perhaps she has a [?] conscience. We all slept as though we were rocked in the cradle of the deep. Considerable damage was done in Toronto and other places. Here the only damage was the blowing down of the newly erected fence around the skating rink and the scrapping off of the flag pole on the Seminary.

Yesterday I was down at London attending the meeting of the University Senate. It was about 11 o’clock when I reached home last night. Our neighbour Mr. Berdux died Dec. 5th and was buried, or rather placed in the Mausoleum on Thursday afternoon. He had bought two sections just a month or so before he took sick. They had a very stormy day for the funeral, which was held only from the house. Mr.

Berdux was in bed for three months before he died. He was a Missourian, but fell out with his pastor, and so was waited upon and buried by Pastor Roberts. I couldn’t attend, but Bonnie was at the funeral and she said Pastor Roberts gave him a great send off and prayed that we might “walk in his footsteps”; which, in view of those that knew him, might not be altogether advisable. Our Seminary Senior who jilted his girl has had things made too hot for him by the girl’s family and has left the Seminary to enter Chicago Seminary, where, I understand, they have agreed to receive him. He will probably secure ordination from one of the Synods in the States and will work over there. I think this is rather disorderly on the part of Chicago, but we are making no protest.

The Synodical Executive Committee met last week to consider the case of student Schulte-Tigges, the Swede whom they brought over to attend the Seminary. He refuses to attend and is working in Hamilton and Toronto among the Swedes and is very obstreperous. He is an able fellow, but I think a little off in the head. I think he will try to link up with Missouri. Hazel sent up yesterday a whole raft of out-grown clothes of Carol’s, which will work in well for Eileen. Dr. Potter was supposed to get back yesterday, but I haven’t heard whether he arrived or not. But I must close here. With love to all, I am 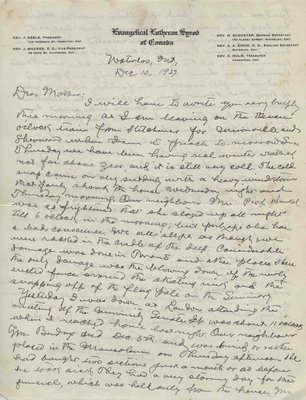