As I have a little time before leaving for Hespeler this p.m., I will employ it in writing a few lines to you. I preached down at Bridgeport this morning. As it was a fine day and bright and cool, I walked down and back. I reached Waterloo in time to see the people coming out of St. John’s and was home almost as soon as they were. The German pastor, Re. Schuelke, is giving up Bridgeport and will preach his last sermon there next Sunday. He was frozen out through the Missions Board’s refusal to continue payment to the parish as long as he was pastor. He told the people he wouldn’t serve them for $225 a year. So the matter is up to the President of Synod and the Mission Board. I do not know what action they will take in the matter. I may have more preaching to do down there or I may have none at all. It depends upon the arrangements that are made, though I think that for the present year the place will be supplied from the Seminary. The Seminary Board will meet on Tuesday to deal with Dr. Willison’s

resignation, the new Seminary professorship and the purchase of the Weber property. Some of their propositions will be of a rather contentious nature, and the Board will have its hands full. Dr. Maurer has his ire up and is fighting mad against Prof. Neudoerffer, who he thinks doesn’t consult him enough, and also against the proposition to get Prof. Aksim. For harmony’s sake we have agreed to accept Prof. Roth instead of Prof Aksim. But Dr. Maurer had other irons in the fire and we will have to wait to see how things will turn out. One of our Seminary students, Mr. Storkopf left suddenly last week and got married to a girl from Conestogo. He was in the middle year and would have taken his B.A. in the College this year; but he couldn’t wait. The last accounts we had of him were that he was looking for a job. Another of our boys, a Senior Seminarian, broke his engagement with the girl to whom he was engaged several years. He is still in the Seminary; but, as I told him, the chances are that objection will be made to his ordination, and that unless he fixed the matter up he will not be ordained. Aside from these unfortunate occurrences everything is moving along fine in the Seminary. I received the copy of the Hickory Daily Record containing Dr. Keger’s Reformation Sermon. Thanks. Well, I must close. With love to you all, I am 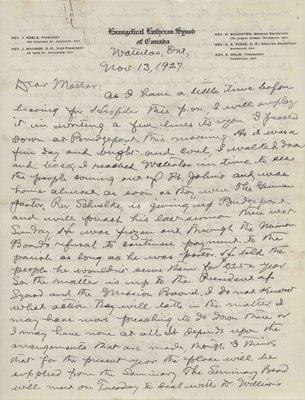