Your kind letter was received yesterday morning and the box of figs in the afternoon. The letter came through with shining colours, but not so the figs. They had begun to work and were in somewhat of a slimy condition. We ate a couple of the best ones and threw the rest away. Thanks, however, for your good intentions! Bonnie had green figs to eat when we were down on our honeymoon. The children, though, had never seen them except in the packed and dried state. I was not surprized at the mild weather you have been having, as we are having extraordinary weather ourselves. I never before saw so fine an October in this country. I have been going in swimming every day – was in yesterday and will probably go in again this afternoon. We have to have fire in our furnace, but need only a very light one; and it is easy on the fuel pile. I was down at St. John’s this morning and heard Pastor Roberts preach a Reformation sermon

on John 1:6. His text was on John the Baptist; but he preached about Luther. He (Pastor Roberts) is very accommodating. To-night the Twin-Cities are holding a Joint-Lutheran-Reformation Service in St. Matthews Church, Kitchener. They have imported as speakers for the occasion Dr. Pohlmann of Phil’a. I thought I would be able to hear him; but I got word Friday night that I was to preach in Hespeler. So I will have to hold a little Reformation Service of my own there. I was interested in hearing of the marriage of Guy Chire’s, second daughter. It is rather hard for me to realize that he has daughters old enough to get married. He is ahead of me in that respect. We are having another crisis in the school just now. Dr. Willison has resigned his position as Professor to accept a call to Trinity Lutheran Church, Hamilton, which he has been supplying during the vacancy occasioned by the removal of Pastor Beringer. The matter came as a great surprise to us all, and I do not know what is back of it as he is uncommunicative and mum as an oyster. I do not think he has as yet accepted the call; but has sent in his resignation to the Board and will probably await its action. He intends to leave, I understand, the first of December. I have an idea that this is a ruse on his part to get into the Seminary; but I may be mistaken about that. I can’t understand why he wants to go down there so soon.

That little congregation would have been just as well satisfied to have him supply them through the winter and enter upon his regular pastorate in the spring after the school work is over. Besides Dr. Willison is under great obligation to the Board which paid him $1000 toward his education at Queen’s University year before last and paid him his salary and $500 for a substitute, while he was sick with appendicitis last spring. He has taken none of us into his confidence, so we do not know what wheels are turning in his head. He is a fine teacher in the English Department and he ought to stay there. As far as I know his relation with Dr. Potter and with all the staff has been without a ruffle. I only heard of this incidentally Friday night. The Board will probably hold a meeting to consider the matter early in November. Dr. Willison is very ambitious and that makes me think he has something up his sleeve. Our student Mr. Tiggers from Stockholm, Sweden, arrived last week. This makes 17 that we have in the Seminary to date, with one more to come. The work has been moving along nicely this year and is quite enjoyable. Prof. Neudoerffer resumed his work last week, but appears quite sad. I conveyed to him your and Herbert’s condolence,

which he appreciated very much. The children are all looking forward to the Hallowe'en celebration Monday night. It is a great time with the children and the young folks in general. The Athenaeum Society held a Halloween session on Thursday night with the witch’ caldron and ghost-story-telling as attractions. I was present and told them a couple hair-raising ghost stories. Little Florence never crawls any more and is very fleet on her feet. Yesterday I was carrying her around looking for the fly-swatter. I thought probably she had had it, so I let her down and told her to find it for me. She ran out into the kitchen where it was lying under the table and brought it to me. I don’t think she is as pretty as some of the others; but she is very smart for her age. She also thinks a lot of her father. Carolus is still working at the Globe and is attending night school about three nights a week. Bonnie was down at Kitchener shopping last week and bought herself a winter coat and hat. I am still waiting for my Phil’a passage money. It is slow, but sure in coming. However, as long as I am preaching every Sunday I can get along. I expect to make $400 over and above my salary by the end of this year. We will celebrate Reformation Day in the Seminary Monday by special services, which I have in charge. Well, I must close. With love to you all, I am 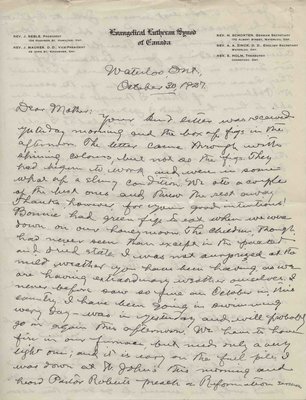