Creators
Carroll Herman Little, Correspondent
Candace Little
, Recipient
Media Type
Text
Item Type
Correspondence
Description
Typed and handwritten letter from Carroll Herman Little to his mother on October 16, 1927. Little discusses family life with wife Bonnie and their children; his work as a Lutheran pastor and faculty member at the Evangelical Lutheran Seminary of Canada in Waterloo, Ontario; and his trip to Philadelphia to attend a meeting of the Theological Commission of the United Lutheran Church in America.
Notes
Carroll Herman Little (1872-1958) was a Lutheran pastor, and a professor and administrator at the Evangelical Lutheran Seminary of Canada (later Waterloo Lutheran Seminary; now Martin Luther University College) in Waterloo, Ontario.

I preached at Bridgeport this morning and am to preach at Hespeler again to-night. So I will embrace the intervening time this afternoon to write you a few lines. We are having fairly cool weather now with frosty nights – quite seasonable for October. I walked down to Bridgeport this morning without an overcoat on, and enjoyed the walk, the air being vigorous and bracing. I took this form of exercise in lieu of swimming, which I haven’t done since coming back from Phil’a. I made a swift trip down there and back, leaving here Tuesday noon and returning around three o’clock on Thursday afternoon. I was able to hold all my classes on Friday, so I really missed only two days on account of the trip. One peculiar incident was that I took a sleeper going down and had the same sleeper and the same berth on the return trip of the same train. Even the Buffalo paper that I had bought and left in the berth stuck in by the bed was still there.

What makes this still more peculiar was that I had not bought a return ticket or asked for any particular berth. I found Phil’a much changed since I was there some 20 years ago. In the centre of the city it had much more the appearance of New York by reason of the many sky-scrapers that have been erected there. When I was in the Seminary the statue of Wm. Penn on the city hall stood out prominently in the sky-line towering above everything round about it. Now it is so low as compared with the sky-scrapers around it that it is invisible unless you are on the street directly facing it, and Penn seems to be shut in a prison from which there is only one exit. We had a fine meeting of the Theological Commission, lasting from 9:30 to 4:30 in the afternoon. All the members were present except two. Dr. Knubel was there as the Chief High Muck-a-Muck of the U.L.C.A. Dr. Voigh was present representing the South. Dr. Gruber, my classmate at Mt. Airy and now President of the Chicago Seminary, was also there, as was, of course, Dr. C. M. Jacobs, President of Mt. Airy. We transacted considerable business, most important of which was action looking toward the amalgamation of certain Seminaries now occupying contiguous territory. I hadn’t seen Dr. Gruber since our graduation together 26 years ago. I also saw Rev. Weaver, who used to be in Nova Scotia, when I was there years ago. He met me at the station when I arrived and I had a couple hours with him

before our meeting opened. He is Dr. Ohl’s associate in the Inner Mission work in Phil’a and has his office in the Publication Building. His daughter Pauline also works there and I met her. The Weavers were very anxious for me to come out and spend the night with them, but I had to refuse as it would have meant losing another day here at the Seminary. I had a 'phone conversation with Mrs. Hoffman (Dr. Hoffman’s widow) and with the Merchers – all of whom wanted me to come out and spend some time with them, which I regretted that I could not do. The weather in Phil’a was incredibly warm. I don’t think we had anything quite as hot all summer. I had to take my hat off and carry it in my hand for very perspiration and would have doffed my coat if it had been lawful to do so. I had put my light overcoat in my grip, but didn’t take it out till I got back home, although from Buffalo up the weather was much cooler. We are to have another – the final – meeting of the Commission on the 22nd of Feb’y; but as that will also be during school time, it will have to be a flying trip too. You should see our little Florence walk now. She goes every where and gets into all kinds of mischief. If any one tries to catch her she fairly runs. She should be weaned,

but Bonnie can’t make up her mind to it yet. Pastor Dr. Bockelmann is in town, preached this morning and will preach again in St. John’s to-night. I haven’t seen him as yet, and may not do so, unless he should call around, as my time is very much occupied these days. Mr. Berdox, our next door neighbour, still keeps to his bed, but it improving slowly. I doubt if he will ever be a very well man again. They were so certain he was going to die that some of the women folks sent their dresses to the dyers and had them dyed black. The Rev. Prof. Hirtle declined the call extended to him by Trinity congregation, Hamilton and will stick to the College, at least for this year. Dr. Willison is supplying them in the mean time. I understand they want me to conduct another catechetical class at Bridgeport this year; but I don’t know whether I will undertake it or not. My article on Predestination appeared last week in the Canada Lutheran. I wrote the Business Manager for a few extra copies, but haven’t received them as yet. If they come I will send you a copy. But I must close. With love to you all and all good wishes, I am

P.S. I bought one card too many at Buffalo and as I can’t use it here, I am enclosing it in this letter CHL 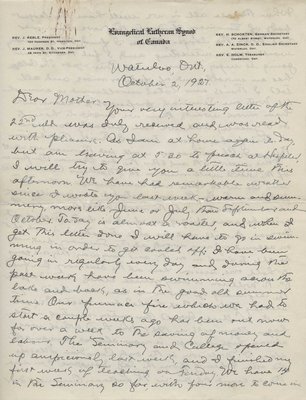