Creators
Carroll Herman Little, Correspondent
Candace Little
, Recipient
Media Type
Text
Item Type
Correspondence
Description
Handwritten letter from Carroll Herman Little to his mother on August 28, 1927. Little discusses family life with wife Bonnie and their children; his work as a Lutheran pastor and faculty member at the Evangelical Lutheran Seminary of Canada in Waterloo, Ontario; a fishing trip with Rev. Pfeiffer; the birth of Rev. and Mrs. Hirtle's twins; and the arrest of burglary suspects in Kitchener.
Notes
Carroll Herman Little (1872-1958) was a Lutheran pastor, and a professor and administrator at the Evangelical Lutheran Seminary of Canada (later Waterloo Lutheran Seminary; now Martin Luther University College) in Waterloo, Ontario.

I have just got back from Port Colborne and Preston, where I preached to-day, and have eaten my supper; and, although it is late – after 10 o’clock, consequently almost high bed-time – I will try to write you a few lines to-night. I would have written you Friday night, but as it was late when I got home that night, I didn’t get it done. On Saturday before I left I might have written, but had to put the time on my sermons for to-day. But as this is my usual time for writing further apologies would be superfluous. I was away all week last week. Rev. Pfeiffer of Linwood took me up to the north country on his car Monday morning. We were as far as Lake Huron and were fishing and swimming nearly every day. The season was not very good for fishing and there were no boats to get out into the deep of the lakes, but I caught one large pike that measured 28 in. long and weighed 3 lbs., and a half-dozen or so of small black bass, besides lots of little fish, which we used as bait. I also had some great swims in the beautiful clear water of those lakes. In one lake that Pastor Tuenkheim and I swam nearly across the water was 25 ft. deep where we went in and had a depth of 56 ft. toward the middle of the lake. The water was quite cold

but the swimming was remarkably easy. When I got up there on Monday evening Rev. Tuenkheim pressed me into service by having me address his Luther League. After preaching the previous Sunday and travelling around 200 miles since Saturday I was somewhat tired, but succeeded in getting away with it and in apparently satisfying my audience. I had a very nice time on the trip and enjoyed the outing in that picturesque country. The weather was ideal – fine and dry – though the wind was cool and there were slight frosts at night. Lake Huron looks like the ocean. Its waves were high and tipped with white-caps and came in with a thunderous roar; and its waters were as blue as the ocean. On last Sunday afternoon Mrs. (Rev. Prof.) Hirtle gave birth at the Kitchener-Waterloo Hospital to two twins – a boy and a girl, Murray Seward and Dorothy Virginia. I did not hear of it till I got back Saturday and have not seen him or her or them since. But Bonnie says Prof. Hirtle is tickled to death over his accomplishment. Evidently he is making up for lost time. He actually invited Bonnie to go down with him in his car to see Mrs. Hirtle and the twins one of these days. I will be preaching at Port Colborne till the 18th of Sept. On that date I will install the new pastor, Rev. Isler. On the 7th and 8th I will be at the Conference meeting in Pembroke, north of Ottawa about 75 miles. So I still have quite a bit of travelling before me. Kitchener and Waterloo have been bothered lately with numerous burglaries; but they caught the lads yesterday. They were local boys of high class society, but dope-fiends. So people are resting easier now. Well, I must close and get to bed. With best wishes and love to you all, I am 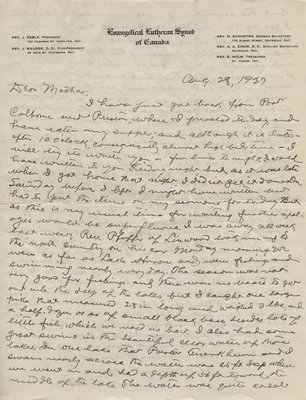