Creators
Carroll Herman Little, Correspondent
Candace Little
, Recipient
Media Type
Text
Item Type
Correspondence
Description
Handwritten letter from Carroll Herman Little to his mother on June 12, 1927. Little discusses family life with wife Bonnie and their children; his work as a Lutheran pastor and faculty member at the Evangelical Lutheran Seminary of Canada in Waterloo, Ontario; the annual tattoo in Waterloo Park; and his need to keep Carolus and Herman out of school next year so they can work and contribute to the family expenses. He also invites his mother to visit Waterloo during the summer.
Notes
Carroll Herman Little (1872-1958) was a Lutheran pastor, and a professor and administrator at the Evangelical Lutheran Seminary of Canada (later Waterloo Lutheran Seminary; now Martin Luther University College) in Waterloo, Ontario.

Your most welcome letter was received a few days ago and greatly enjoyed. I was surprized to hear that you were going up to Washington to participate with the President in the reception of airman Lindbergh. I know that you and Mabel will have a nice time there with Bikle and his family. Since you and Mabel are so far on your way north, I and all my family from the smallest to the greatest extend to you both a hearty invitation to come the rest of the way and pay us a visit. I will be away at Synod from the 15th to the 20th; but after the latter date will be at home, I urge this the more strongly as I do not expect to be able to get down South again for some years to come, and I think this is too good a chance to miss. Let me hear from you soon that you are coming. To-day has been a very busy day for me. I was down at Church this morning, after dinner I bottled nearly 100 bottles of beer, then I went down to the park for a swim, came back and had my supper, and left at 5 o’clock by bus for Guelph where I preached to-night. I preached a festival sermon on the Trinity, but left the people some ground of encouragement and hope and did not say as Pastor Roberts did in German this morning: “I am of the firmest conviction that most Christians are on the way to hell.” The weather still continues quite cool up here. The

water in the lake to-day was warmer than the air. On account of the cold weather my garden doesn’t show much yet; but I got over it this last week and it can now wait till after Synod for my attention. I wore my overcoat with great comfort down to Guelph and back to-night. The old bus was about an hour behind time in returning and it was almost 11 o’clock when I reached home. Consequently if I have to cut my letter short you can guess the reason. Our “Tattoo” is over. It took place on Thursday evening, June 9th – Blanche’s birthday, I believe. They held it much earlier this year than usual, thinking no doubt to strike warmer weather; but it was as cold as ever. But the crowd was as large as usual and was estimated at over 5000. We didn’t any of us go to it, but went down and saw the street parade of the bands and witnessed the fire works from Jefferson. Ruth was very much frightened, but said she guessed the Lord wouldn’t let us all burn up. Catharine, after the first or second shot ran in the house. She said she didn’t like it and that it was too cold to be out there anyway. I have been going swimming every day since the 8th of June. I waited as long as I could for it to warm up, and when it didn’t I concluded it would be just as warm in the water as outside anyway. The College School will close the last of this week; but after that the boys will have their Provincial examinations lasting from the 28th of June to some time in the first week of July. They (Carolus and Herman) have been trying to land jobs for the summer, but so far have not succeeded, work being very slack just now. I have about decided to keep them out of school this next year if they can get work. I hate to do this, but they are quite willing and it is about the only way in which I can get along. I have been preaching nearly every Sunday this year

in order to make a go of it; but find it an uphill work and that I am not making much progress at it, and as I have so many more coming on I find that I must have some help from the older ones. Carolus has already applied for a position in one of the Insurance Company’s offices. I don’t know, though, whether he will get it or not. I lacked about $50 in paying my current expenses last month; but that will come all right when I get my “bonus” of $100, which I have asked for, but which is slow in coming. Our Board is very hard up: but is having a special meeting on Tuesday to consider the financial situation. I am hopeful that they will evolve some scheme, by which they will remedy the matter. The way things are now one feels more or less uncertainty as to whether he is going to get his salary or not; and that is not a very pleasant prospect to a man with a large family living from month to month. However I am not of the kind that worries very much. Well, remember us all kindly to Bikle, Hazel and Carol, and you and Mabel be sure to come up and pay us a visit before you return home. Our Summer School will be on toward the last of June. With love and good wishes, I am 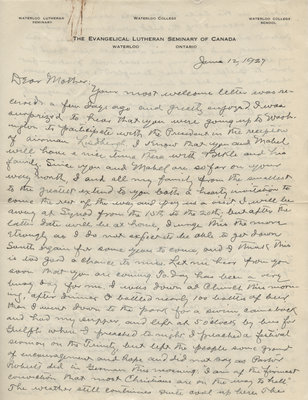