Just for a change I thought I would use my typewriter this afternoon. To-day is Whitsunday and is very fine, but also quite cool .We put a fire in the furnace again this morning, and it feels quite good. The weather has been socold that I haven't done any work in my garden since planting it. I wanted to get over it once before Synod which meets next week at Milverton; but unless there is a great change in the weather this week it will not be done. I was down at St. John's for church this morning;but didn't stay for the communion as we will have the communion at Synod next week.I am going to Guelph to-night to preach. I can leave here at 5:30 and be back by 9:30 which is a much better connection than we used to have Last Sunday I preached down at Bridgeport, which also didn't require much time away from home. I don't know what I would do if I didn't have a considerable amount of preaching to do to eke out my income. Even as it is I am about $50 behind on current account and the last of this month I will have about $25 to pay out for the older children on their Provincial Examinations But I am after our treasurer to pay us the bonus of $100 that is due,but has not been paid as yet.If that comes in it will see me through that difficulty,and I see no use in borrowing trouble. This week just past saw the real beginning of our vacation period. I went out fishing a couple times, and each time came back high liner of the crowd.One day I caught a carp that weighed between three and four lbs.This with a few other smaller fish that I caught made us a fine meal.I hope to get out a time or two this week,but that depends on the automobiles at my disposal.The fishing grounds around here are nothing to brag about,but are better than none. I may go up with Dr. Willison after Synod to the Muskoka region for a few days .There the conditions are said to be much better.I have about all my committee work for Synod well in hand.We may have a very interesting meeting of Synod, or it may be dry and commonplace. That depends upon what comes up for discussion.The financial situation of our Seminary is likely to be thoroughly threshed out, as it needs to be. We are in about as big a hole as we have evre been, and some way out must be sought. Otherwise everything has been moving along fine and smoothly. There are so many vacancies in Synod now that it is going to be quite a problem to fill them, and I expect the question to be raised as to why two of our graduates should be going to the States at such a time as this. But this is not the fault of the Seminary Faculty, but rather of the Synodical and Missionary authorities. By the meeting: of Synod we will have at least eight vacant parishes. If this goes on it will greatly hamper our work. I suppose you received the Memorial copy of the Cord. It gives a good account of the College and its progress since affiliation.The high standing of our graduates gave us a great reputation.The papers gave us considerable free advertising, and the Kitchener Daily Record commended the institution editorially. Politically the infamous OTA. has passed out of existence, and in its place we now have the GCA. The papers announced a great line-up at the Government stores in the various places where they were opened up last week, buteverything quiet along the Potomac, and no disorderliness at all.Every-

body seemed to be well satisfied. I haven't bought a permit yet,and may try to hang out till October, as a permit for the period from now till then costs as much as a permit for the whole year after that date. However if some of my relatives or friends should come up I would strain a point, especially as there is practically no limit as to the amount one may lay ip, except the size of his pocket book.I bottled or rather kegged my dandelion wine last week.I think it is going to turn out great, but I will have to wait a good while on it to get ripe.We are expecting to hear some news from Herbert's almost any day now.I hope the news will be favourable and wholly up to their expectations.The Hirtles over here are expecting an increase in their family .I don't Know how soon, as they are rather reticent about it, but from appearances I should say it will come about Sept.The Neudoerffers are also in a similar state of expectancy,much to the surprise of everybody, as it was generally thouht that Mrs. N. was too old to conceive such a thing.I think theirs is expected about Oct. She told Bonnie,but I don't remember the exact date.Our little Florence is fine and boasts of four teeth now. To assure herself that she actually has them she grits them together to hear the sound. She is the best natured of all the babies we have had and has

a smile for everybody,particularly, for her father and her mother.

Well, I think I have written enough for this time ;so I will close and get ready for early supper. With love to you all and an apology for my use of the typewriter this time,promising never to do it again,

P.S. It may interest you to know that Marion passed to-day from the childhood to the woman stage of life 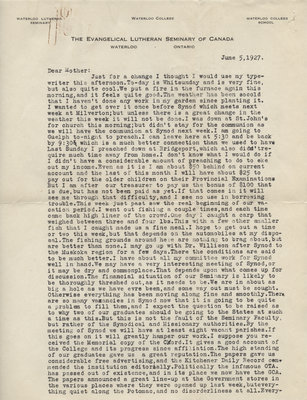