While Bonnie and the older children from Carolus down to Arthur inclusive are at Church, and Robert, Ruth and Eileen are out playing ball, and the baby is asleep in her carriage, and “all is quiet along the Potomac”, as it were, I thought I would embrace the opportunity thus afforded to write you a few lines. This morning I preached down in Bridgeport where I also held a communion service. There was the usual attendance – around 40 – and we had a fine and enjoyable service. I was disappointed in one respect, however, and that was that I didn’t get my pay. The reason for that was that the treasurer was not present. As I didn’t get my pay last month I was expecting $10 to-day; and it would have come in good as funds are getting low at this stage of the game. However, to-day is payday and our cheques will probably be here to-morrow. This afternoon I was over at Kitchener to see one of my old Bridgeport members who is quite sick with dropsy. He was for many years Supt. of the Sunday School there and was one of our most active members. I don’t think there is much hope of his getting any better, though he may last for some time yet. He seemed to appreciate my visit very much. Our Board at its meeting last week gave each of is Seminary professors a ‘bonus’ of $100 in consideration of the extra work we took upon ourselves in taking over Dr. Zinck’s subjects. This was not as much as we

should have had, but was probably all that we could expect of the Board in view of the financial straits in which it finds itself placed at the present time. They also voted me a salary of $100 per year as bursar in lieu of tuition for my boys, and the prospects are that at their next meeting they will adopt the policy of granting free tuition to pastor’s sons. In this case I will be in $100. They also appointed a Committee to look into the matter of securing a new professor for the Seminary in order to relieve us of our extra load. So taking everything into consideration we should be thankful for small favours. We had an Indian Sadhu here for several days, whom Prof. Neudoerffer knew in India. He addressed the students in the chapel on Friday and preached in German at St. John’s this morning and in St. Peter’s in English this evening. He is a Sadhu or ‘Holy Man’, and wears their regular yellow uniform and is under the vow of celibacy, poverty and devotion of life to religion. He is a Lutheran trained in the Hermannsburg Mission. He is not ordained, but is a travelling Evangelist and takes no money except what is necessary for his travels. He is leaving to-morrow for the United States, where he expects to spend 6 months. He spent a year on the continent of Europe, and 6 months in England before coming here. He is very well-informed and quite evangelical in his preaching. In Sweden he conquered the language sufficiently to preach in Swedish in Arch-Bishop Söderblom’s Church. He is as black as a negro, but otherwise does not have negro features. He was over here at the house about half an hour this afternoon. I found him quite an interesting talker. The weather has been quite cool ever since Easter, with north winds and frosty nights.

I haven’t done a stroke of work in my garden as yet, though I had it plowed about a week or more ago. One doesn’t gain anything my planting before the ground is warm. I expected to go to London on Friday last to the Senate meeting; but the meeting was postponed until later. This week will be our last week of teaching, examinations beginning on Friday and continuing for two weeks. Our Seminary closing will be Thursday May 26. Convocation at London will be on the 28th, and our College celebration will be on Sunday May 22 in St. Matthew’s Church with Dr. Bauslin of Harrisburg Pa. as the preacher for the occasion. Bonnie is doing her spring housecleaning now and is working like a Trojan. Well, I can’t think of any more news, so I will close for the time. With much love to you all and all good wishes, I am

Carolus took a picture of the Sadhu to-day. When it is finished he will doubtless send you one. CHL. 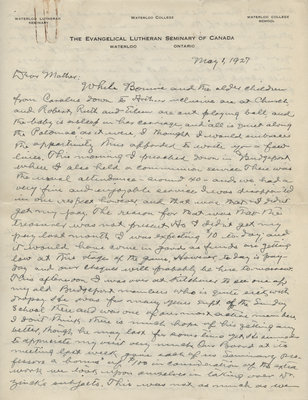