I am late in getting my letter started to-night and so will probably have to make it short and snappy. Bonnie and Marion and the boys were at Church to-night and I had to play baby-nurse, and the little minx was bound that I should hold her all of the time. Then Dr. Willison came over and spent the evening till 10 o’clock, so that my time was fully occupied. However it is better late than never. So here goes it. I received your letter of the 8th and enjoyed it. I knew you would feel quite cut up over Dr. Gerberdings distressing death. It also must have been quite a shock to Pearl, whose nerves are none too good. I was glad to get the Lenoir-Rhynean containing an account of Dr. Gerberding’s death, as we received no particulars about it up here. As to the Lenoir-Rhynean I do not think it compares very favourably with the Cord, and was surprized at the kind of verse they print. However, poets are born, not made; and one perhaps should not be too critical. We had the finest Easter-day to-day that I have ever seen in Canada. It was bright and sunshiny and warm all day. I preached down in First English this morning and gave them a festival sermon at my best, which the large congregation seemed to appreciate. I also

assisted Dr. Maurer at the communion. About 150 communed to-day and about 115 on Good Friday evening, the combined communions establishing quite a record for that congregation. I wore my new robe on both occasions and felt quite fully dressed. Carolus says he is going to take my picture in my picture in my robe sometime for your benefit. If the weather continues nice and warm like it was to-day I will have to get into my garden this week. It will be a good time to get in under way too as our vacation in the Seminary extends till Thursday noon and I have only one class in the College in the meantime. Next Sunday I am to preach in Toronto again. In the College School they had examinations in the First and Second Forms before Easter and Arthur, the smallest boy in the school stood second in his class. He made 95 in German, coming within one point of being the highest mark, which was taken by a born German of about 20 years of age. The other morning at breakfast Eileen said that when she grew up she was going to marry two fellows. Arthur said, “Then you would be a bigamist.” Eileen said she didn’t care and Arthur, quick as a flash said, “Then you might as well marry three and be a trigamist.” He is great on repartee and in using big words. A few mornings back Catharine was coughing pretty hard and I said, “My what a cold you’ve got!” She looked up to me and said, “I think if I had a drink I would be all right.” She is very fond of beer and regards it as a good remedy for almost any aliment. My last batch of beer turned out very fine, and though I do say it myself, I do not need to call the breweries my uncle. I was sorry to hear that the frost

our frosts had extended so far south and had played such havoc with your fruit prospects. We had it very cold at the same time, but it did no damage as nothing was far enough advanced here to be hurt. We had it fairly cold right along; in fact to-day was the first day on which we had no furnace fire. I have enough coal in the cellar for two weeks yet, and I hope I will not have to buy any more. We had five dozen coloured eggs for the children for Easter this morning, and I don’t think there are five eggs left to-night. They – at least the smaller ones – were up about 5 or 6 o’clock this morning hunting for their eggs, and seemed to enjoy it quite as much as at Christmas. Marion took her first communion to-night. Little Florence sits alone now and is practicing on the consonant sounds now, saying “Dă, dă” and the like. She is such a sweet little thing that every body loves her and the whole family is devoted to her. The only thing she is slow about is cutting her teeth. Some of them look as though they might come through any time now; but they have not as yet appeared. Well, I must say good night and bring my letter to a close. With much love and all kinds of good wishes, I am 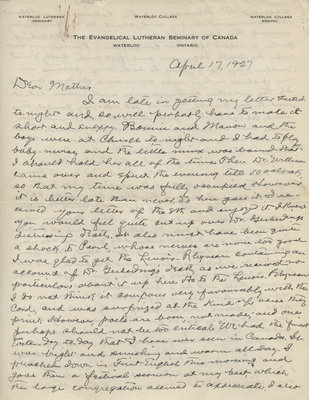