As I didn’t get around to writing to you Saturday night, I will try to give you a few lines to-night. I had quite a trip to-day – to Toronto and back. I left Waterloo this morning by Radial at 5:50 o’clock, went to Galt and took the C.P.R., arrived in the city at 8:25, preached in First Lutheran Church at 11 a.m., and was back home at 6:20 p.m. This was quick work, and I received $15 for the day, clearing about $11, which wasn’t too bad, all things considered. But I am feeling a little tired to-night. Next Sunday I have agreed to preach for Dr. Maurer, which is a thank you job. I don’t feel under particular obligation to him; but he is having it pretty hard just now, and as Dr. Willison is still laid up and Dr. Zinck is gone and he has no one to help him out I agreed to do so. Marion was confirmed this morning. As I was away, Bonnie also could not go. So only the boys and Eileen of the family saw her confirmed; but Bonnie says she is quite sure Marion looked as swell as any of them in her white rig. There were 36 in the class to be confirmed, and the whole service was in English this morning. On the 24th, the Sunday after Easter, I am to go down to Toronto again. The most objectionable [?] to this is the early rising. I had to get up a little after 4 this morning in order to make my connections. However, I caught up a little by sleeping on the train. I suppose you have received

the picture of me Carolus sent you the other day. It is an old picture of which you already have a snap-shot; but he sent the picture as a sample of his enlargements. He sells these enlargements at 25₵ a piece mounted and makes a little spending money this way. He first takes the snap-shot and then enlarges it, and does quite well for an amateur. Robert got out of quarantine on Tuesday of last week and has been back in school since. The very day they took the quarantine sign off the door Bonnie broke out with measles and had quite a dose of them. As we were in quarantine when we didn’t have the measles we thought it only fair to be out of quarantine when we did have them. So we didn’t have the sign put back on. None of the others have shown any sign of having them as yet. Bonnie thinks she caught hers from the Willisons when we were over there about a week or two ago. Dr. Willison is improving very slowly from his operation. The wound hasn’t healed up as yet and fills up with pus or serum. I was shocked to hear a few days ago of Dr. Gerberding’s sudden and violent death. I didn’t hear any particulars and last week’s Lutheran hasn’t arrived at the Seminary as yet; but it certainly seems hard that an old man, such as Dr. Gerberding, should be so cruelly done to death. I suppose, from your last letter, that you were away when the accident occurred. Enclosed I am sending you a snow seen over by the letter box and the row of spruce trees on the Willison side, snap taken by Carolus during our last big snow. I am also enclosing a clipping from the Record describing Dr. Sperling’s wonderful cross on St. Peter’s Tower. It is about the most striking thing in Kitchener and is massive. It if were a fixture instead of a revolver I would like it very much. The revolution (which it isn’t making yet) renders it too theatrical

to please my aesthetic taste. However, he has put it all over the Catholics in the magnificent proportions of the cross. We are closing our schools for the Easter holidays on Wednesday afternoon of this week. The College and College School will reopen on Tuesday afternoon. The Seminary will not reopen until Thursday p.m. This will give us a little respite from the rather hard grind we have had since Dr. Zinck left. In the first two forms of the College School examinations began last week. Arthur thinks he made good grades on all subjects so far, and I think he will make a good showing. Examinations in the 3rd form will not take place till after Easter. Well, I have already transgressed the limits that I expected when I started this letter, so I guess I had better stop now while the stopping is good. With love to you all, and all good wishes, I am 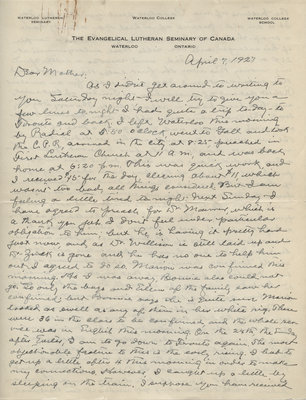