As I am preaching at Bridgeport to-morrow morning and at Guelph to-morrow evening, I am, in order to make sure of your getting your regular letter, going to write you a few lines to-night. My time is somewhat limited and news is scarce, so my letter this time will probably be brief. We have had fairly cold weather steadily since I wrote you last week; and it looks at present as is gardening were still a long way off. But I guess it is better to have the cold weather now than later on in the season. I received my cheque to-day and after I had paid my monthly bills I had almost $3 left over. Hence I am taking all the preaching appointments I can get in order to get money enough together to pay for the daily supply of milk and other incidental cash expenses. Happily I am filled up for April with the exception of Easter Sunday. I will not even be at home to see Marion confirmed on Palm Sunday; but it can’t be helped, as I must be on the look-out to make the living for the family. However, I am in good hope that things will be a little better after the Board meeting the last of this month, when, I am led to believe, there will be a readjustment of my salary. We had a meeting of our joint Faculties with representatives of the Board this week, in which, we threshed out matters pretty generally and received

assurances from the Committee that they would support our propositions before the Board. The instruction has been running along so harmoniously under the present arrangement that we unanimously recommended its continuance. If this is accepted by the Board we will have no President, but Prof. Neudoerffer continue to be Chairman of the combined Faculties and Housefather of the Institution; and we have asked that another Professor be called to the Seminary and still another be added to the College School staff. Prof. Neudoerffer has shown wonderful administrative capacity and, unlike his predecessor, takes all the members of the various faculties into consultation before taking any action. He also has introduced regular meetings of the different faculties and of joint faculties to talk matters over, and has coordinated the work as it has never been done before. He also worked out a budget system for the Board for the whole institution and a plan for the future development in place of the 'hit and miss' system, or rather want of system on which the Board has hitherto acted. The members of the Board present expressed themselves as delighted with the smooth and harmonious running of the institution under his administration. I think they thought after Dr. Zinck’s departure the institution would 'go to pot', and were surprized to find it going on better than ever before. The spirit that prevails among the members of both faculty and student body is quite different from what is was under Dr. Zinck’s administration, and the work is again as pleasant as it was under the late Dr. Hoffmann. And he is even a better organizer and disciplinarian than Dr. Hoffmann was. Whatever Prof. Neudoerffer does he does in a tactful sort of way and without infringing upon any body else’s authority or prerogatives. Examinations in the College School begin next week. I will

hold one of my examination in the School before Easter and the other immediately after. Then my work in the College School will be over for the year, and I don’t think I will take on any next year, as I got no credit for this from the Board, though my work there is worth $175 a year. I am expecting an increase in my salary as Bursar to bring up my salary to what it was before the Board reduced it. I should by rights have more, but hardly think the Board will do it under the present financial stress. I bottled my brew the other day and had 124 bottles all told. It is nice and clear and gives promise of being the best yet. Our Provincial Parliament has enacted the Government Control law and will open up its shops on or about May 1, after which time we are looking for a great influx of Americans. Tell Clarence, however, that if he should arrive here before May 1, I will try to have a little beer on hand to revive his drooping spirits. I don’t remember whether I told you in my last letter about getting a fine silk Doctor’s robe, or not. It is very beautiful and in it I need not be ashamed to take my place among the Senators in the procession at Convocation at the University at London in May. Robert is still in quarantine – though he has and never had any more measles than the rest of us. He will get out, however, on Tuesday. I only regret that he has to miss so much school. I am still taking my morning baths. It has run my water bill up considerably. For the last quarter I used nearly six dollars worth of water; but it has kept me in good shape, and I think it was well worth it. But I must close. With love to you all, I am 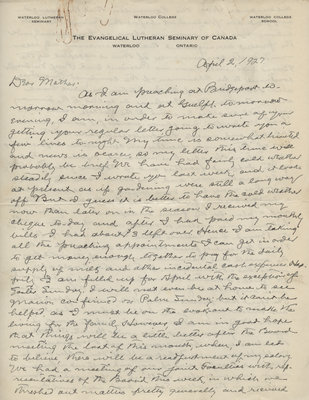