Although I am not going away to preach anywhere tomorrow and could write you then as well as now, I have concluded not to procrastinate, but to write to-night and get the job over, especially seeing this is my birthday. Whether it was to celebrate it, or whether it was a mere coincidence, we had a great snowstorm. It snowed 10 or 12 inches and I had to send the children out to shovel the sidewalks. March came in like a lamb and is going out like a lion this year. We had it fairly cold all week and especially at nights, when it froze up hard and stiff. I could have gone to Guelph again this Sunday, but as it necessitated leaving to-night and not getting back till Monday, I resigned the offer in favour of one of our students. I probably would have gone anyway; but I had such a hard day of it last week that it took me nearly all week to get over it, and I thought I had better take a rest for this Sunday. It snowed all day last Sunday and I had to speak four times, preach twice and lecture to the Bible Class twice – once at each place – besides driving about 20 miles. As the driving was by auto, it didn’t bother me much. But the Bible Class lectures were as long and took as much out of me as the sermons. Next Sunday will be my Bridgeport Sunday and I am booked ahead for two Sundays in April in Toronto, which has become vacant through the removal of Pastor Christiansen to the States. Just at this point Bikle call me up

by long-distance from Washington and congratulated me on my birthday. He tried to talk, but the phone didn’t work very well and I couldn’t get very much out of it. However, it was good to hear his voice, even if I didn’t get much more out of it. As it was snowing all day outside I passed my birthday very quietly at home. Bonnie bought me a box of cigars, so with them and my old stand-by pipe, I had plenty to smoke. I also managed to squeeze a glass of grape-wine out of my keg, which enabled me to whet my whistle. But it was the last drop in the house, and I am surprized that it lasted as long as it did. It only shows what a moderate drinker I am. I washed my bottles and my brewing out-fit this afternoon, preparatory to starting a brew. I didn’t make any during the long winter months,and I thought it was about time I was getting busy again. As our Government Control goes into effect around the first of May, this will probably be my last brew, unless the Government beer should prove too high to buy. I am enclosing in this letter a clipping from our daily paper, which may enlighten your eyes as to the liberty we enjoy in Canada and how it is appreciated by the benighted citizens of the neighboring republic along the border. Things are moving along smoothly in our institution since the departure of President Zinck and the indispensable one is scarcely missed. The Board will meet during Easter week and I am in hopes that they will pay us extra for the increased work we have taken upon us since the beginning of this semester. If they do this I will not be so badly off, as I have supplemented my salary considerably by preaching this winter. My coal bill is also about $50 smaller than it was last year. I succeeded in getting a nice suit of clothes made for $27 – just about half I usually pay for a suit. So things are evening up a bit. I bought a robe the other week – a fine silk one. I had it made in the States

and had to pay 35% duty on it, and also sales tax; but still got it for less that $50. Marion will be confirmed on Palm Sunday. I am glad of this, of course; but at the same time it entails quite an expense as the girls have to have two dresses – one for the public examination and the other, the white, for confirmation, besides shoes, stockings, hat, etc. I think her bill will run around $40. Too much stress is laid upon the dress up here for such occasions. We have a quarantine ticket on our door again. The German measles have been as thick around here as ticks on a dog’s back. The other day the school nurse sent Robert home as having the German measles. He had a swelling of the glands of the neck, but nothing more. I called up the M.O.H. and told him about it. But he said that was the diagnosis and he had the placard put on. I kept Robert in bed for two days, though he wasn’t in the least sick and appears still as well as he ever was. But he will have to stay in the house for two weeks – all which he gets for having a swelling in his neck. There is this relief, however, that this quarantine does not affect contacts, but only those who actually have, or are supposed to have the disease. There are cards all over Kitchener and Waterloo. Dr. Willison’s are placarded because of Enid. Dr. Willison is home again and is able to walk around, but will probably not resume work till after Easter. Dr. Martin from the University is giving good satisfaction and is very much liked by the boys. Prof. Neudoerffer continues popular with everybody – both students and Professors. The preliminaries of the Oratorical Contest in the College School were pulled off last week and Carolus got on the finals making the second highest grade in the school.

He ought to stand a pretty good show for the Orator’s Medal. Herman had a good speech too and did very well, but didn’t get on. Little Catharine – I mean Florence – having so many girls I sometimes get their names mixed – is growing more active and cuter every day. We have to strap her in her carriage now to keep her from falling out. She catches hold of the sides and pulls herself up and leans over the side, so that she is liable to fall overboard if not strapped in. She coos and laughs in great style and seems to enjoy life most heartily. Bonnie is fairly well now and is putting on flesh. I think she would weigh about 115. She is afraid she is soon going to be “fat and forty”; though as a matter of fact she will be only 39 at her next birthday. Well, I think I have drawn out this letter to a considerable length. If I stretch it much longer it might break. Therefore I will close without further ceremony. With love and best wishes to you all, I am

PS. Just to fill up the page I will tell you a joke on myself. Some time ago when I was away preaching and stopping at the place where I was being entertained, some of the women asked me what the baby’s name was, and for the life of me I couldn’t think of it till about a half hour afterwards. The hostess said to me “It is easy to see who named the baby.” But it wasn’t as easy as she thought. You might pass this on to Mabel whom I forgot on one occasion that she remembers very well. I had a nice letter from Gus Setzer the other day. CHL 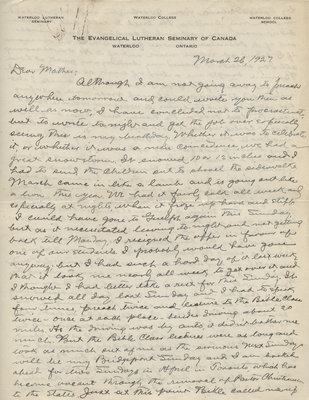