Bonnie received your letter yesterday and will no doubt answer it if she ever finds time. In the meantime I will say that we were delighted to hear from you again and enjoyed your letter. I am preaching down at Brantford again Sunday, so I am writing you this p.m. Yesterday I was over at London attending a meeting of the University Senate. I rode over in Dr. Potter’s car and came back by train. We had a short, but very interesting meeting of the University Senate. I am not supposed to give out any advanced information; but seeing you are so far distant, I suppose it will be safe for me to say that we recommended the Editor of McLean’s Magazine for the title of LL.D. There was policy in this and an evident hope of the advancement of the University Campaign for endowment by degrees. We had a fine day for the trip – bright, clear and cool, with a wonderful rainbow circle around the sun for a great part of the day. The weather has been constantly and consistently cool since I wrote you last week , and nobody has started gardening as yet. April seems to be holding its coolness to the bitter end this year. As I got on the train at London I found Dr. and Mrs. Maurer on board on their way home from Chicago. Dr. Maurer, while still somewhat thin, had a good colour and expressed himself as feeling much better. I am afraid, however, that when he gets back to work he will realize again that he is quite weak. He will, however, no doubt be in good fighting mood for the Board Meeting, which will take place next week.

He is at the bottom of most of our troubles, and is determined either to rule or ruin. He conferred with a persona non grata to us over in Chicago, and I am sure, will try to force him into the Seminary despite our protests. He has heretofore favoured the separation of the Seminary and the College; but is now in favour of amalgamation. He will not reason, but is controlled entirely by his prejudices, which grow stronger with years. The fact that, Prof. Neudoerffer favours separation would be quite sufficient to set him on the other side. I didn’t discuss the matter with him on the train as I didn’t want to get into controversy with him. I used to think a lot of him, but I have completely lost confidence in him. We are looking forward somewhat anxiously to the action of the Board at its meeting on Tuesday. I stated our case to Dr. Neville at the University and told him that I was opposing Dr. Potter in the matter, and he expressed himself as entirely agreeing with me. Dr. Neville is Dean and Registrar of the University and was acting President this past year during Dr. Fox’s illness and absence in Fla. When Dr. Potter some time ago proposed Dr. Willison as President of the Institution, Dr. Neville replied, “Why not Dr. Little? I like him very much”. Dr. Potter didn’t tell him what answer he gave. I am not, however, seeking the job; but wouldn’t mind taking the Presidency of the Seminary in case of separation. A great deal will depend upon the action of the Board this next week whether the Seminary will go forward or backward and I hope that they will make a wise decision. But with all the propaganda that is being made for centralization this is problematical. I haven’t heard from Chicago by letter since I wrote you; but I received the Seminary Record yesterday. It contains no announcement of any degrees to be confirmed on Extra-Mural students, from which I infer that my case did not meet with the approval of the Faculty. If this is so I will pursue the matter no further. Drs. Krauss and Gerber both said they would do what they could for me, but

intimated that they had an obstreperous faculty to deal with and could only express hopes as to the outcome. I received all the benefits of the course and do not particularly need the degree and will therefore not press for it.

Bonnie said that I should tell you that she bought the stuff you recommended for the baby, but that the latter wouldn’t look at it, or condescend to taste it. She has her preferences as to what she drinks. They run this way beer, tea and water, on the descending scale. Milk is taboo. She would rather take cod liver oil. I noted what you had to say about my swimming and gave it due consideration. In consequence I went in swimming only twice this week. Next week will be our last week i.e. the last full week of lectures. Then will follow our Exams. I am anticipating, however, by having two next week. Prof. Hirtle had a set back last week with his rheumatism and has been in bed again all week. The Berdux’s are still sick but improving. Mrs. Moser is able to hobble about a little in her room. We will have no Summer School this year; but the Presbyterians are negotiating for the use of the Seminary building for that purpose. I don’t know yet whether they will get it or not, or when, if they do, they will hold their sessions. But I must close. With love to all and all good wishes, I am 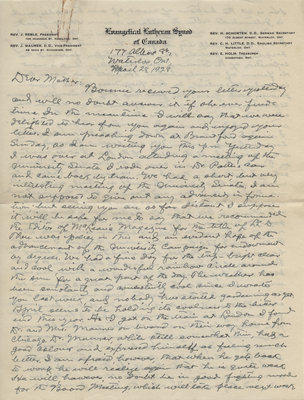