Creators
Carroll Herman Little, Correspondent
Candace Little
, Recipient
Media Type
Text
Item Type
Correspondence
Description
Handwritten letter from Carroll Herman Little to his mother on January 13, 1928. Little discusses family life with wife Bonnie and their children; his work as a Lutheran pastor and faculty member at the Evangelical Lutheran Seminary of Canada in Waterloo, Ontario; Carolus' decision to become an accountant; the weather; and the death of Pastor Robert's wife.
Notes
-- The bottom, center of page 3 is missing

As I will have to leave here early to-morrow afternoon for Sherwood and Unionville, and will be busy to-morrow morning preparing my sermons for the occasion, I thought I would take time by the forelock and write you a few lines to-night. Perhaps you won’t mind getting your letter a day or so in advance. We have had a streak of extremely mild weather ever since I wrote you last. I have been going down town practically every day without an overcoat on and frequently without a hat, and experienced no discomfort. I went down that way and back this morning. Our snow is all gone except in spots and there has been no skating, or sports, of any kind. I get cooled off though every morning by taking my cold plunge in the bath tub. It agrees with me so well that when I was down at Hamilton last Sunday and called on President Reble, he asked me what I was doing that I was improving so much, and added, “You are looking so well that you are actually becoming good looking.” I enjoyed my trip down to Hamilton last Sunday and found preaching easy in that small church. I am filled up

with preaching appointments for the rest of this month, and am in hopes that I will fare as well as I did last year in the regard. We had a fine Lecturer at the College this week in the person of Dr. Harry Rimmer, President of the Society for Scientific Research of the U.S.A., who gave us three fine lectures on the general subject of “The Collapse of the Evolutionary Theory.” He was one of the finest lecturers that I have ever heard; and when he had finished the general verdict was that the evolutionary hypothesis was thoroughly and completely demolished. Dr. Rimmer is only about 40 years of age and not very prepossessing in appearance, but as a popular speaker he is a marvel. We were all quite shocked this morning to her of the death in the K. & W. Hospital of Mrs. Roberts, Pastor Roberts’ wife. She went there about two weeks ago to undergo an operation for some womb trouble, I think. She passed through the operation all right, but did not improve, rather grew worse, until one o’clock this morning when she passed away. She was of a bright, sunshiny disposition and had made many friends here, and there is much sympathy for Pastor Roberts and his small children and sorrow over her departure. She is the third pastor’s wife to die within a year – all comparatively young women. Mrs. Roberts was not quite 37. The funeral will be held on Sunday afternoon and the burial will take place in Ellenville, N.Y. I was down to see Pastor Roberts this morning. He feels very

bad over his loss and especially for his motherless boys, the youngest 5, the oldest 9. Mrs. Moser, over at Prof. Hirtle’s, is improving somewhat; but is still confined I believe to her bed. It is quite likely that her days are also numbered. Herman got quite a nasty cut over his eye tonight in playing basketball at the Sem. I sent him down to Dr. Zwick who bandaged it up for him; so I guess he will be all right again in a day or two. Carolus is working steadily in his Accountant’s apprenticeship and likes his job very much. He is shining around the girls again – since he has a respectable job – much to his mother’s chagrin and disappointment. He brought his girl up to the house last night, which shows that he isn’t ashamed of her. I saw her and I thought she was pretty nice looking. I had a nice letter from Hermine the other day. She is looking forward to the time when they will have a car. Then she said Guy says they will pay us a visit – come up, as it were, out of the American desert to the Canadian oasis and sing “God save the King.” She thought the snaps we sent were great and that our family of children was almost as good [?] as theirs, which is a compliment [?] send you with this mail also [?] which just came out this week. I [?] it and fortunately there is nothing in [?] I think you will find it [?] that. We will

start our examinations next week, which will continue to the end of the Semester, when we will make a new start, Feb’y 1. But I must close as it is getting high bed time. With love to you all and all good wishes, I am 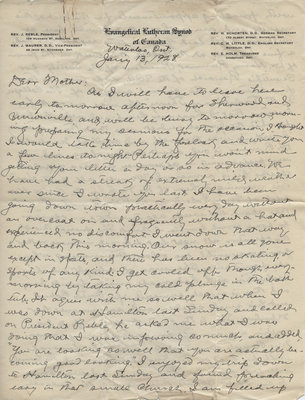