Your most welcome and interesting letter was received a day or two ago. As I am going to Hamilton to-morrow and will not get back until late Sunday night, I will write you a few lines this afternoon and probably get my letter off in the mail collection this p.m. I was surprised at the cold wave that you had so far south. It was almost as cold down there as we have had it, only you did not have so much snow. Just now we are having another soft spell. The snow is melting and it is quite sloppy under foot. I never find fault with the weather; but if I had my preference I would rather take it cold. I was quite shocked to learn of the death of Dr. Chas. L. Coon. I don’t remember exactly when I last wrote him; but it seems to me that it was further back than just before Christmas. My recollection is that I wrote him with reference to Educational matters and gave him an account of our splendidly coordinated system in Ontario. I am sorry that the letter came too late and never reached him. I regarded him as still comparatively young and of excellent physical vigor and was not prepared to hear of his death. I think he could not have been more than five years older than I am; and Bonnie says of me, “The older you get the younger you act.” I

am booked up for preaching for the next two Sundays. It gives me lots of work to do; but it is the only way I can make a living and keep the family going. In 1927 I cleared, over and above all expenses, by preaching $442.50, which you can imagine was quite a help. If I should get sent out as much this year I should do still better, as I now have a Clergy permit over Canadian roads, thanks to President Reble’s intervention. Carolus has given up his work at the Globe Furniture and is entering a Chartered Accountants' Firm in Kitchener. The opening is a good one from a financial point of view, and he was eager to go into it. He will take the course, which runs over a period of five years. In the meantime he is earning his own way and a little besides. They start him off with $40 a month and his street car fare and increase the salary $10 a month each year. When he has finished the course and taken the degree he is assured of a salary of $4000 a year or more. I would rather have seen him go back to school and take his B.A., and study for the ministry; but I told him I couldn’t help him very much in that line and that if he wanted to take this other work I would put nothing in his way. I am sorry, because I think he would have made a good minister; but in view of the family that is coming on behind him and the constant struggle to make ends meet, I didn’t feel justified in with holding my consent. I think he will make good in anything that he undertakes. He did not seek this job, but it was offered to him and came as a great surprise. He worked at the Globe until last evening and made a good record there. In

view of the position that was offered him they did not blame him for leaving, though they would have been very glad to keep him. Herman and Arthur are both doing fine work in the College and College School. Herman thinks now he will go through for a professor; though I hope he will change his mind for the ministry. If he doesn’t I will have to bank on Arthur, who is the brightest of all the boys and is considerable of a Theologian now. Robert thinks he will be a farmer, but I think he will change his mind about that. He gets along well in his studies and never makes any time about them. I think we will start Catharine to Kindergarten after Easter, as she is very anxious to go. She can express herself the best of any child I ever saw for her age. She also has the prettiest eyes in the family and is generally regarded as a beauty. Florence is a sweet little thing and very affectionate. She has taken a special shine toward the picture of her grandmother and wants to kiss it every time she comes near it. Mrs. Moser is a little better and can eat a little now; but they are still keeping a nurse for her and a maid. We will begin our mid-term examinations in College and Seminary the week of the 18th. Our town election passed off very quietly last Monday, I lost only one vote in some 10 or 12. But I must close before I run into politics. With love and all good wishes for the New Year; I am 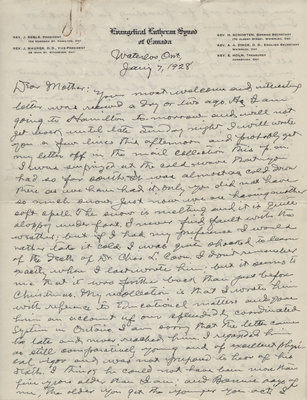