I have just finished a letter to Bonnie to-night and now it is your turn. As I told her all the news and don’t like to repeat myself you letter will probably be somewhat lean. But I will give you a 'lick and a promise'at any rate. I suppose by this time you have had your trip to Columbia, that Herbert’s wedding is over, and that he is on his second honey moon – which must be quite thrilling, even if not quite as exciting as the first one. Well, I hope that they, in the words of the popular novelists – will be “happy ever afterwards”. Bonnie is still with Meda in St. John. She intended going to New Germany yesterday, but had word from her ex-stepmother that it wouldn’t be convenient to have her earlier than the 26th or later than the 31st. So she is going over Monday and expects to stay about a week there and then a few days with Max at Kentville, then back to St. John, and thence home again. I don’t think from the way she writes that she is having as good a time as she expected, and am afraid she will be still more disappointed at New Germany. With only Don there of blood relationship and with everything so changed, it will not likely seem like home to her anymore, and she will miss her father’s presence more than ever. She writes nearly every day. She says little Catharine is well and perfectly happy and that she makes friends with everybody, and is a great favorite. She sang all the songs she knew, and she has quite a repertoire, on the train going down, and repeated the commandments, particularly

I-IV, greatly to the amusement of the passengers and made quite a hit with the conductor. Bonnie says Donald (Gunn) is a very quiet lad and much smaller than Herman. He is still in short trousers and will be for a year yet. She wanted Herman to take notice of this fact, but it made no impression upon him. He thinks he is quite a man and really appears so. He led his class again at the Easter examinations with an average grade of 85. We are getting along fine with the meals and the housework. This afternoon I took advantage of my presence at home to put the wash through the machine. I tried to get a woman and couldn’t. So now, it is done and it didn’t cost me a cent. I don’t say it was done as well as Bonnie would have done it, but it will answer the purpose, and I am somewhat proud of the accomplishment. I bottled my beer Saturday night – had 83 bottles. I have a new system, which is almost equal to the brewery and makes the brewing one of the easiest things imaginable. The bottled beer is to-day perfectly clear. I think I have practically eliminated the settlings. I was down at Church this morning, and the children were down to-night. They have just got back. Arthur was telling me what the sermon was about. He always marks the text down in his Bible. We had some mild spring weather for a couple days last week causing the green grass to appear, but bringing out no buds. To-day opened up cold again with northerly winds. It was spitting snow the greater part of the day and I had to keep a good fire on. I let it go out a couple times last week, but always had to kindle it again. Yesterday was very rainy and cool. Ruth likes to go to school and was disappointed that there was none yesterday. To-morrow is her birthday. I will have to pay her a quarter or so. She is a dear

little girl and thinks a lot of her father. I am becoming quite an expert in making biscuits, which is all the cooking I do, and can make them in a very short time; and which is more remarkable, they are quite edible. Carolus, however, is the chief cook. Herman gets the breakfast, which is the height of his culinary accomplishments. In the Seminary we miss Dr. Hoffmann very much but among us we are carrying on his work. He had it pretty well along and we will have only a few weeks to finish up. We expect to have Pastor Bockelmann to preach the Graduation Sermon on May 20th. I expect to have my confirmation at Bridgeport on May 9th and communion on Whitsunday. Two of the class are children of Mr. Gastmeier, who brought us home in his car the Sunday you were with me down there. Well, I must now close. With love to you all, and all good wishes, I am 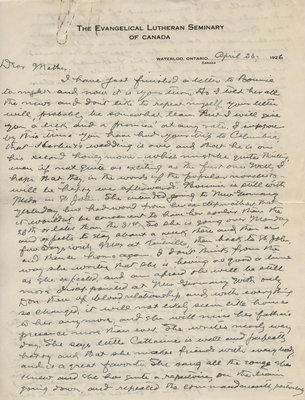