Your very interesting and most welcome letter was received to-day, and as I find this afternoon about as convenient as any time to write to you, I will do so without delay. I was rather surprised that Bikle had told you of his proposed visit and the accompanying circumstances – which are Marion and myself – as I took it from his letter that he intended to give you a surprise. But I have no fault to find with his procedure in the matter, and I suppose it is just as well that you should have the pleasure of anticipation, which is often considered to be greater than that of realization. I had great trouble to get Bonnie off on her trip. In the first place she is as proud as Lucifer and objected seriously to going on Bikle's money. She is always a better giver than receiver. Then she got “cold feet” over the prospect, was afraid that something might happen during her absence; that the house couldn’t run along without her; that we might all starve or get run over by automobiles or street cars or in some other way die an unnatural death; and that she didn’t want to go anyway. She raised a thousand and one objections; but I remained firm and finally won out. She left on Wednesday the 14th and took Catharine with her. I accompanied them as far as Galt and saw them on the train for

Montreal. I had a card from her Thursday written from Montreal saying that they had reached that lap of their journey O.K. From there it was only a night’s run and half a day to St. John, where she will spend some time with Meda before going over to Nova Scotia. She intended when she left to stay only three weeks, but I wrote her yesterday not to cut her visit short, but to stay as long as she wanted to. We have been getting along fine since she left and can do so indefinitely. I gave each one of the children their jobs and everything is moving with the regularity and precision of clock work. All I need to do is to sit around and boss the jobs. We started Ruth to Kindergarten the first of the week and I arranged with the principal to let her go both morning and afternoon while her mother is away, so that she doesn’t have to stay at home alone. She likes to go to school and takes great interest in the little things they make in Kindergarten. She sleeps with me at night, which she considers quite an honour, and she is quite well satisfied with the situation. She often tells me she wouldn’t go off and leave her “poor little father”. She is a great blarney. The other day she wanted to pay me a compliment. So she said: “My dear father has such a big mouth; it is bigger than Eileen’s, bigger than Marion’s, bigger than Herman’s, bigger than Carolus’s, bigger than mother’s, bigger than anybody’s in the world.” You may imagine I felt quite flattered!

Dr. Hoffmann died on Saturday night at 10:30 o’clock, and was buried on Wednesday, the day Bonnie left. His funeral was a very large one. I don’t think I ever saw so many ministers gathered together as were present at his funeral. The body lay in state in our chapel and the floral offerings were magnificent.

I am enclosing some snaps that Carolus made of the flowers in the chapel. We had no school in any of our departments until after the funeral. But I had a lot of work to do in connection with it. I wrote out the obituary which I read at the funeral in St. Matthew’s Church, Kitchener and I drew up the resolutions both for the Faculty and for the Board. Dr. Hoffmann was a powerful personality and was by far the ablest man in the Canada Synod, and in every respect a perfect Christian gentleman. We miss him very much and his passing has cast a gloom over our entire institution. He resigned the presidency, not because there was any trouble or any fault found with his administration; but simply because he found the work becoming too complicated and burdensome. He did not resign his professorship and worked right up to the last hour preceding the Easter vacation. He preached also on Good Friday in his parish at St. Jacob’s and had prepared his Easter sermon, though he never preached it. I always liked Dr. Hoffmann and feel that in his departure I have lost a very dear friend. All his family were around him during his sickness and at the moment of his death. His son in law, his daughters in law and all his grandchildren were here. I think Mrs. Hoffmann will go to Phil’a and live with Mrs. Dr. [?] her only daughter. The Board of Governors met on Tuesday but did nothing except pass the resolutions of condolence. They will meet again on May 5, when

they will try to arrange for a successor to Dr. Hoffmann. We have been having very cold weather since Wednesday with occasional snow flurries. Not a bud or blade of grass shows as yet. While the ground is bare in most places I have about 2 ½ ft. of snow in front of my house and all the woods are still full of snow. I had to buy another ton of coal this week, making the 17th ton for the winter and running my coal bill for the year to over $200. It is still cold, with a very strong wind. Herbert must have moved up his wedding a week or so as it now appears to be taking place in April instead of May, which was our last information. I hope you will have a nice time at the wedding and wish him and his bride much joy. If he would extend his trip to take in Niagara we would be pleased to accommodate him here. Carolus is a good cook and would no doubt serve up satisfactory dishes; and while Bonnie is away we could easily give them room. Tell him he is invited. I read Arthur what you said about MacLean’s. He said, “That’s a gentle hint for me to send it again”, but he didn’t say whether he was going to do it or not. I am preaching at Galt to-morrow. I expect to take Ruth along with me and she is looking forward eagerly to the trip. My letter is getting long, and as I have about exhausted all the news, I will close. With love and best wishes to you all, I am 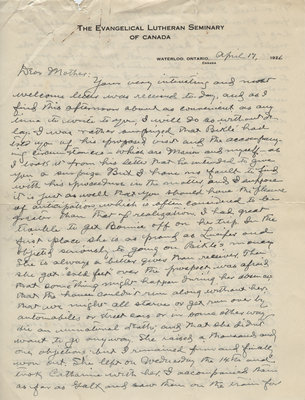