As I am going away to-morrow afternoon to preach at Sherwood and Unionville on Sunday and will probably be too tired to write when I get back Sunday night I have concluded to write you a few lines to-night. Our winter weather is still holding on with no signs of a let up. The days are fine and bright, but too cool to have any perceptible effect on the snow and we are still surrounded by snow banks on all sides. The nights are still very cold – one night recently we had it as low as 16° below zero. On Wednesday I walked down to Bridgeport as I have done nearly every week this winter. I have been quite fortunate in that nearly every Wednesday has been fine. I will not finish my class for Easter, but hope to get them ready between that time and Pentecost. Eileen wrote you a little letter to-night which I am enclosing. She wrote it all herself without any help from anyone and without any suggestions as to what she should write. She is also sending you a couple “snaps”, which she thought you would probably like. She is a bright little girl and is getting along exceptionally well in school. The pictures were taken a little too far away, but will give you some idea of how the children look. Little Catharine likes to play out in the snow and is always bothering

me to dress her up. She will come and say “Please put on my sweater”, and when I have put that on she will say “Please put on my coat”, and so with every other piece till she is fully equipped with sweater, coat, scarf, cap, rubbers and two pairs of mittens. Then she and Ruth go out and coast. She is so good at blarneying that you can’t refuse to do what she wants. Arthur came in to-day in great glee. They had an examination on history on which he made 98 and Marion 71, so that he had a great crow over her. He says he doesn’t study half as hard as she does, but that it is the brains that does the work. He took Carolus down to Kitchener to a show to-night. As Carolus is out of work now since the new baker is in charge Arthur took pity on him and decided to give him a treat. It is only the little boys that have spending money just now, which they make from their paper route. Bonnie received a big bag of pecans – 13 lbs. – from Blanche yesterday and we’ve all been feasting ever since. She sent them by parcel post, the postage on them being $1.13, which I’m afraid was more than Blanche could afford. They came right through without even passing through the Customs’ office. We certainly enjoyed them. Bonnie thinks pecans are about the finest nut in the world and they are about as expensive as any up here. At the current retail price the amount Blanche sent would come to over $10. Bonnie is feeling some better than she did a while back. She broke her glasses some days ago and I had her eyes retested and had her fitted out with glasses of the same style as mine. Our oldest citizen in Waterloo, Mrs. Sobisch passed away yesterday age of 104 years. She was Roman Catholic in religion. I am very busy these days with my preaching, lecturing, catechising and post-graduate work, and don’t have much time for extras. With best wishes and love, I am Most Sincerely yours, 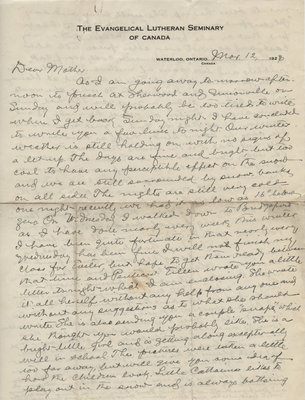