Your nice newsy letter was received a day or two ago and was much enjoyed. I will endeavor to answer it this evening as well as I can. I should have been away at Sherwood-Unionville preaching to-day; but we had a big snow toward the end of last week, about 3 ft. falling on a level and the high wind caused it to drift very badly. So yesterday I had a long-distance call from Sherwood advising me that the roads were so badly drifted that it would be practically impossible to get around and calling off the services for to-day. I am booked, however, to go there next Sunday. I didn’t mind giving up the service as I really needed the rest, but it puts me in rather bad condition financially. I can get along fairly well as long as I have preaching to do every Sunday, but when I miss a Sunday I am at once in financial straits. I am puzzled just now as to how I can save enough to get up there next Sunday. However, there are some compensations: we had communion in our Church this morning, which I would have missed if I had been away preaching. We had it very cold last week and even up till last night when the thermometer was considerably below zero. To-day, however, it is milder and looks as though we would have some more snow. Friday, I think it was, I shoveled snow for one solid hour – bareheaded at that – before

I succeeded in getting our sidewalks open and even then I didn’t do a particularly neat job, but made the walks passable. February is always our snow month up here, and this particular February seems determined to keep up the record.

Herman received your letter with the dollar in it on the morning of his birthday. As I had previously given him a dollar he felt quite rich and went with his mother to the “Movies” that night. He was agreeably surprised and quite grateful for the remembrance and will no doubt write to you before long. Prof. Henkel’s daughter (adopted) was married in the Seminary Chapel on Shrove Tuesday at High Noon. They had a great feed for the guests, keeping them for both dinner and supper. Dr. Hoffmann and his wife and Bonnie and I were invited down for supper. Besides the eats they had smokes and drinks in plenty. We stayed down there so late that I didn’t have a chance to attend the Seminary skating party, which took place that same night. I understand, however, that it came off with the usual éclat. Mrs. Rumball, our next door neighbour on Jefferson St., died last night in St. Mary’s Hospital (Catholic) in Kitchener. She was taken down there just a week ago with some sort of womb trouble and underwent an operation from which she did not recover. I don’t know, but wouldn’t be surprised if she didn’t bring the trouble on herself, as like so many women she was dead set against having children. She had three and leaves a baby just 7 mos. old. The doctors say she died of “flooding”. She will be buried Tuesday afternoon from the Undertakers’ parlours. It leaves Mr. Rumball in a pretty bad way as they are very poor. He has her mother with him but she is an old English lady who is good for nothing as far as work goes and is also beginning to be quite childish. Girtie Woodburn is still there, but she is young and inexperienced. So I don’t know what he

will do. Bonnie and I went down this afternoon to convey our sympathies. Mr. Rumball seems to take it pretty hard for the rough and ready character that he is. All that I can say is that they have always been good neighbours. But they were not Church people. I don’t think either of them was ever in a Church to a service since they have been in this country. I don’t know whether he will have a minister to bury her or not. If he does it will likely be through the intervention of the Soldiers’ Aid Society. I noticed some of the women of the Society go by heading for down there this afternoon. We were quite surprised over the news you told us about Herbert. I am glad to know that he is getting such a fine girl and hope that he will have a renewed lease of home life and much happiness. If I am permitted a suggestion I would suggest that when she changes her surname she should change her given name also. I confess that I am not much enamored with “Elvira”, and I suppose that with any other name she would be just as sweet. I was glad to hear that Dr. Guberding was recovering so nicely from his operation. It is remarkable in the case of so old a man. I was interested in your account of their happy married life, which is as it should be, but unfortunately is not always the case. Bonnie says it is no wonder they are happy since they had no children; but, of course, I cannot agree with that, and am sure that there are more happy families with than without children. But I must close. With love and all good wishes, I am 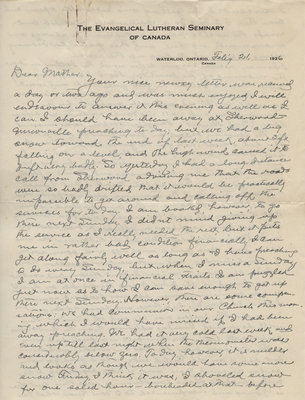