I am going down to Guelph early in the morning to preach and, as I don’t expect to get back before 12 or 1 o’clock to-morrow night, I will take time by the forelock and write you a few lines to-night. We are having extremely cold weather just now. It was away below zero last night and was cold and blustery all day and promises to be much colder to-night. I imagine I will have a rather cold trip to-morrow by bus, but as the bus is heated it will probably be endurable. I wasn’t outside of the house at all to-day: what time I was not engaged in working on my sermons I was stoking the furnace in the endeavor, in which I succeeded quite well, to keep the house warm. The snow, of which we have quite a bit, made drifts many feet high all around us, and it looks as if winter had at least set in in earnest. Last week we had our Examinations in the College of Arts and the Seminary. I held two examinations, and will have three more this next week – all in one day. The examinations are three hours each, modeled after those of the University with which we are affiliated, but I am able to combine

some of my classes. So far my boys have done fairly well. I am still meeting my catechetical class at Bridgeport regularly every Wednesday afternoon. They are getting along nicely; but I don’t think I will undertake such work again as I find it a rather burdensome addition to my Seminary work. The children, Ruth and Catharine are about over their colds and are as lively as ever. Bonnie has for some time been threatened with a nervous breakdown and I have been trying for some time to get her to see a doctor. I finally succeeded in getting her down to Dr. Zwich's last night. He gave her a thorough examination and said she had a nervous heart and that she would have to let up on her work if she didn’t want to spent two or three months in bed. He advised her also to drink a quart of milk a day and gave her a bottle of tonic. The milk prescription went very much against the grain as Bonnie hates milk worse than the devil hates holy water. However, she started in to-day; but I don’t think she will keep it up long. I set the boys to helping with the housework, which gives her some relief; but she won’t be idle, and all that I can hope for is that she will let up a little on the rush. Her appetite is good, which is one thing in her favour; though she says the milk will destroy that if she keeps it up very long. I was threatened with the grippe myself the first part of the week, but took a good physic

and shook it off in a couple of days, and am feeling all right again. Bonnie made two big quilts and one little one this week in addition to her regular work, doing all the quilting herself and I don’t know what other sewing she did aside from the regular mending which is considerable. I told the Doctor last night that she did more work than any two or three other women, which was quite within the truth. You should hear Eileen recite now. She learns lots of pieces in school and says them with what she calls “expression”, and she does it well too. The baby can also say quite a few pieces which she picked up from the children and can sing like a lark. She can count up to 12 as fast as any of the children and without making a mistake. She reads the funny papers and makes up stories about them as she goes along and is the brightest and happiest little thing you ever saw. Arthur is undoubtedly the best singer in the Central School, but he always manages to keep out of the contest by disguising his voice in the preliminaries. Little Ruth is a very pretty child. Many people think she is the prettiest girl I have, but I think the palm should go to Catharine. But in a picture Ruth would no doubt show up the best on account of her dark hair and features. Marion has passed the best winter so far that she has ever had, but just at present she has a rather bad cold. Carolus worked again to-day

in the German bakery and will probably make enough to keep him in spending money a part of next week. Arthur is the only one who is saving any money now. He put another dollar in the bank this week. Bikle wrote some days ago and asked how the boys were coming on with their bank accounts. I guess he won’t think much of their business ability when I write and give him the facts in the case. I am hard up myself, because some of the places where I’ve been preaching haven’t paid me as yet. But I must close. With love to you all, 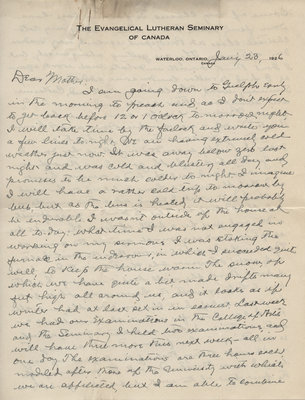