Your most welcome letter of recent date came duly to hand and was read with pleasure. I thought I had it on my desk so that I could give it the answer it deserves, but when I came to look for it it was non-est. The very smallest ones, Ruth and Catharine, are very quick to snatch any thing that is detachable on or about my desk and they may have abstracted your letter. So I will have to go at it hit or miss. As to your previous letter, I received it all right. I remember that I was able to pick out the three Mauneys on the picture and distinguish them, though I had forgotten the Rudisill and his wife who were also on the picture. The reason I did not mention the letter was probably because coming the first of the week I thought that I had already answered it. I was sorry to hear that Aunt Phrone was so low, but glad to know that she had her right mind and full consciousness and that she was so happily reconciled to her situation. As I have heard nothing since your last letter I presume she is still alive. May the Lord bless her and grant her a peaceful and an abundant entrance into His Kingdom of glory!

Our small pox scare is over. No other cases developed in the school. A few of the boys had rather sore arms from the vaccination and a still smaller number were out of classes for a couple days. But

quite a number didn’t take at all and these were revaccinated last Friday. The vaccination didn’t ever form a scab on my boys, and the doctor said it would be useless to revaccinate them, as he didn’t expect it to take on them. When I wrote you last week I was so low in funds that I doubted if I would be able to buy a stamp for my letter, but I got $1.15 at the House Com. meeting yesterday for money that I had advanced on revenue stamps etc, and I have exactly that amount on hand right now from which you can see how closely I can calculate ahead. I had no preaching to do again to-day. There are plenty of vacancies, but the Synodical Mission Com. put it in the hands of a couple of our students and they are working it among themselves and their fellow theological students. They are preaching too much for their own good and for the good of their needy professors. I think we will have to take some action toward curbing them. The weather is very cold to-day and very windy. There is too much snow for good skating on the dam, so I didn’t go down to-day. But there is ice everywhere and the children were skating all over the streets. Out pastor preached on the Every member canvass this morning. If he accomplishes all that he wants to he will revolutionize things around here. But I’m afraid he is foredoomed to disappointment. I would gladly do more if I could, but I’m back at least $5 on my pledges of last year and can’t possibly undertake any more. This has been, I think, the hardest year I have had and I don’t know how I am going to get through with it. We are all well again. Herman and Carolus are over their sore throats. There was quite an epidemic of it around here

for a time. Pastor Roberts was nearly laid up with it, but managed to pull through with his services and keep going. This week will see us through to the holidays. The Seminary and College will close on the 18th at high noon and we will be free till about the 5th of Jan’y, I think. Dr. Hoffman intends spending the holidays with his children in Phil’a. The rest of the professors, as far as I know, will all remain here. The children in the public schools are having their Christmas examinations and are all doing well. Eileen made a hundred on examination on Arithmetic. She can add up correctly columns 25 figures deep where she has to carry from 15 to 20. She never makes a mistake in carrying. Carolus and Herman are having their examination in the College School. They haven’t received their reports as yet, but I think they are doing pretty well. Arthur’s hens haven’t laid any eggs for months. He became disgusted and yesterday offered to give them to me for eating purposes. So I killed three of them yesterday and we had them for dinner to-day. After we got through there was nothing left of them but the bones. I expect to kill the remaining six for our Christmas dinner. Thus each of the children should have enough. But I must close. With love to all, I am 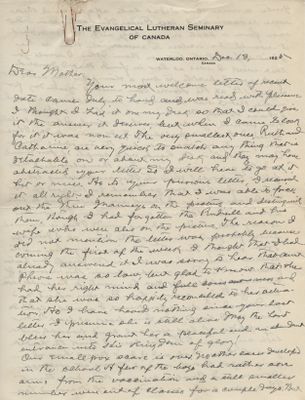