As another week has gone by since I last wrote you, I will have to try my hand at it again, though I haven’t much to write about as things have been running normally with us except that Robert and Arthur had slight attacks of the grip last week. Robert was pretty sick and was out of school practically the whole week and Arthur lost a couple days. However both the boys are now well again. Little Catharine has been rather restless the last couple nights, particularly last night. Bonnie thinks she has worms, but I am doubtful about it. However, I am getting a worm powder for her from the doctor to-morrow, by which we will be able to find out. She grits her teeth at night to some extent, but seems to be all right in the day time and is one of the liveliest ones we have and the best natured of all. Small pox has broken out again in the Seminary. One of the students from Kitchener had a mild case of it and was home a week and then returned to school, no one knowing and probably he himself not knowing that he had it. To-day another of the students, one boarding in the Seminary, contracted it. I don’t know at this writing what will be the effect upon the school. The M.O.H. was up this afternoon, but I didn’t hear what action

he took in the matter. If he doesn’t close the school, I suppose, he will order a general vaccination. I don’t know what he would do in our case, but I don’t anticipate that it would take anyway. To-day was a fine Sunday for a change. It was nice and bright and fairly cool. There was a little snow yesterday and last night, just enough to cover the ground nicely and make it white. The lake in the park has been frozen over for several days, and this afternoon Arthur and Robert and I had our first skate of the season. The ice was smooth and fine where the snow had been scraped off and we had a most enjoyable skate for about an hour and a half. The ice was about 3 inches thick. It will freeze a couple more inches to-night. I was not away this Sunday and don’t know whether I will be away next Sunday or not, but hope I will have a chance to make a little extra. The Women’s Auxiliary held their annual bazaar from Thursday-Saturday in Kitchener. Bonnie and I were over yesterday afternoon. They thought they would make about $1000. This is not as good as last year, as there was too much of that nature going on at the time; but it will help to pull things through. I suppose you had a big Thanksgiving dinner Thursday. With us the day passed like any other ordinary day. Our Thanksgiving day was on Nov. 9. Beyond being a holiday it is not made very much of here. Well, I must close. With all good wishes and much love, I am 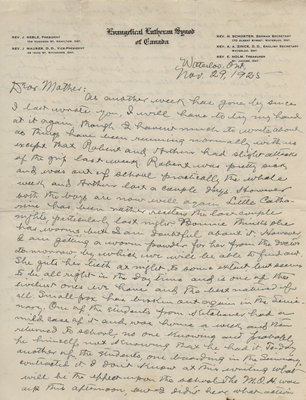