From the above address you will see that I am not at home. I came up here this morning along with Prof. Schorten to help Pastor Boerner, one of Seminary graduates, celebrate his Harvest Home festival. Prof. Schorten preached in German this morning, and I am to preach in English to-night. They sent an automobile down for us this morning and will take us home to-night. But as the distance is between 30 and 40 miles, it will be late when we get back to-night. Consequently, as we have a long afternoon here, I thought I might as well use a small part of it in writing my letter to you. We are having very cold weather now for the time of year. It has been spitting snow off and on all day and the wind is raw and cold. I left them all well at home this morning except that Bonnie wasn’t feeling so well, having taken a cold. I had a little cold myself the other week, but have gotten bravely over it. We had a church full this

morning and the pastor assures me that we will have more out to-night. Everything has been moving along nicely at our school and we have now a total enrollment of 82 which is a big increase over anything we had formerly. As a result of our controversy with Chicago the Seminary authorities sent our student Mr. Ernst back to us and he will now finish his course at our Seminary. They complained about the sharpness we used, but I am persuaded that if we had used milder methods they would never have sent him back. However, the incident is now closed and we can be friends again. Another item of interest in connection with our work was the gift last week by Mr. Seagram, the big distiller at Waterloo of $1000 toward putting our athletic grounds in shape. This gift was secured by Dr. Potter, Dean of the Waterloo College of Arts. It will be just about enough to put the grounds in good shape for all kinds of games and will be well-pleasing to the boys. Carolus took his supplementary examinations Saturday on the two subjects on which he fell behind last year. He hasn’t got his marks yet, but has hopes that he passed.

I had a letter from Dr. Willison the other day. He said he found his work hard at Queen’s University, but was enjoying it. He wanted to know all the news about Waterloo

so I wrote him at once and gave him such information as I had at hand. I was down again at Bridgeport last week, Wednesday afternoon and had two more out at my class. The two additional ones were sons of the man who drove us back from Bridgeport in his car last summer. His name, which I couldn’t think of at the time, is Schweitzer. Marion wrote a letter to Cecile the other day, which I suppose she has received by this time. Marion has also had a little cold lately, but is much better than she was before we began the treatment suggested by Bikleˊ and I think she is going to get all right over it.

I got a good joke off on my Middlers and Seniors the other day. I had to go over home for a book and I told them to see that they behaved while I was gone. When I came back they were all crunching apples. I said “Well, that’s one point in favour of Evolution: animals always prefer their stomachs to their brains.” Little Catharine is just as sweet as ever. Whenever I come in from the Seminary or anywhere she says “Father’s home again”. She can form long sentences and talks almost as well as any of the children and is very original in what she says. Well, I must close. With love and all good wishes, I am 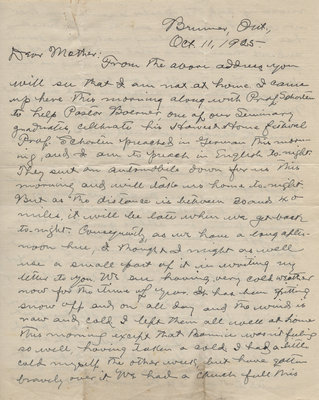