As another Sunday has rolled around again I will try to write you a few lines to-night. We have had a very wet day to-day. It began raining last night and has kept it up without intermission all day. As this was about the second rain we have had all summer we have no reason to complain about it. I don’t think I ever saw a drier summer than this has been. In consequence of this our late planting was an exiguous failure, and I am more convinced than ever that once planting is quite sufficient. We had lots of corn, but it matured so rapidly that we had to eat it all up in about two weeks. My to-matoes are ripening very fast now also and seem to have gotten over the rot with which the first ripe ones were afflicted.

This morning I went down to St. Matthew’s, Kitchener, as I wanted to see the Church after its new decorations. They spent about $7000 on the interior and the money was well-spent. I don’t think I ever saw a Lutheran Church with so rich and so beautiful an interior. It is really a work of art that would be hard to surpass. I preached down in Toronto last Sunday and had a very good congregation out to hear me. After service the men were talking together in German and I joined in the conversation, when one of the men – Mr. Heinzmann of the Heinzmann Piano Company asked me if I was born in Germany.

He seemed quite surprised when I answered “Ich bin in Süden der Vereinigten Staaten geboreu”. I regarded this question as quite a compliment to my “Dutch”. On Monday morning I went to the station and met Bonnie, who decided after all to come down. We intended to take the boat trip and go across to Niagara Falls, but when we got down there we found that the boat was running on City time, and that the next boat would not get back in time for us to catch the train for home Monday night. So we decided to take in the Canadian National Exhibition instead. It was, as it always is, a great exhibition and we saw a great many wonderful things, among them a Southern girl do some remarkable stunts from an airplane. In the evening we took dinner with Col. F.S.L. Ford at the Alexandria Palace, where he lives. He used to be a physician at New Germany, N.S., but in the war was advanced to be a Col. and after the war was given charge of the Military Hospital at Toronto and made a teacher in the Military Institute there. He is an old bachelor and lives in luxury in Toronto. He seemed very pleased to have us with him. We found everybody all right when we arrived home at 10 o’clock Monday night. On Tuesday Carolus with Mr. Gladstone Schaeffer, a friend of his, went to Toronto to the Exhibition. They took in the sights of the city one day, attended the Exhibition one day and went over and saw Niagara a third day. They came back Friday reporting a great time, and I think from what they said that they saw about everything that was worth seeing. They got through the entire trip on about $16 apiece. Since then Carolus has bought himself a nobby suit of clothes, for which he paid $28.50. In it he looks quite presentable. He still has some money left for spending purposes. Herman worked until yesterday, and as he didn’t go off

or blow any money he has more than $50 on hand. He is going to buy himself a suit of clothes shortly. These things will relieve me considerably, though, I will still have plenty to provide for. Hazel helped out a little too by sending clothes for the little girls, which will come in handy this winter. She made quite a fine smocked dress for Eileen and sent some nice coats and other things. Yesterday I bought a type-writer from Herman’s employer. It is a Remington and hasn’t been used much and is in fine condition. I got it at a bargain for $27.50. I was going to use it for this letter, but found I could make faster progress with pen and ink. So, I decided simply to address the envelope this time and to write my letters with it when I get a little more used to the keyboard. I am sure after I acquire the necessary skill for running the machine you will find my letters much more legible and my chirography much improved. To-morrow morning I am starting off on the early 6 o’clock train for a long trip – all the way to Ladysmith, Province of Quebec, where I will attend the Eastern Conference to which I was appointed by the President of Synod. I expect it will be a nice trip. I will reach Ottawa to-morrow at about 5:30, will stay all night with McCreary and the next day we will go together to Ladysmith, which is about 50 miles N.E. of Ottawa. I hope to get some real good beer over in Quebec. It is about 450 miles from here to Ladysmith. The little children have been in school one week now. Carolus and Herman will start Wednesday. The Seminary will not open till the 22nd. We have fine prospects for the College of Arts and expect to have about as many in Seminary this year as last year. Bonnie has put down about 80 jars of preserves so far and has yet to do plums, peaches and pears. I have had some 8 tons of Alberta coal put in so far. But I must close. With love I am Sincerely yours, 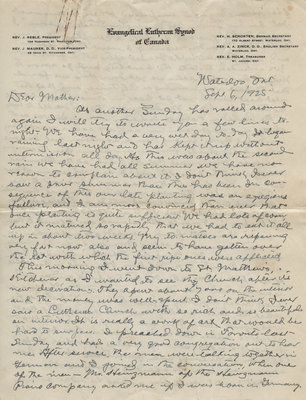