Your kind letter of the 16th inst was received early last week. We were glad to hear from you and to learn that you had arrived back home right side up and safe and sound. Right now while I think of it I will answer your query as to why I made no mention of the interchange of letters addressed respectively to Bonnie and Blanche. As soon as we found out the mistake we sent Blanche’s letter to her, expecting her to do the same with Bonnie’s letter. If Blanche had acted in this sensible manner, you would never been any the wiser and would have been spared the chagrin of knowing that you had made such a mistake. I didn’t intend to be the first one to “blab”. But it seems down your way people are obsessed with the idea of “special delivery” letters, probably with the patriotic purpose of making the Post Office pay through increased revenue. It did, however, finally occur to Blanche to send Bonnie’s letter, and so she finally got it. We have had a couple little showers since I wrote you last week and somewhat cooler weather. As a result the garden isn’t looking nearly so bad and the grass on the lawns is showing here and there a bit of green. But our cistern has very little water in it yet, and I am still carrying water for the wash from the Seminary. I don’t know how long this will keep up,

but I hope every week will be the last. I preached down at Bridgeport again this morning. It reminded me of the last time I preached down there, when you were with me; and I missed you very much as I went down alone. It seems a strange coincident and an evidence of history moving in circles and repeating itself that next Sunday evening I am to preach again in St. Jacobs. Bonnie and I were over to Kitchener to-night to hear the famous London preacher Campbell Morgan in the Lyric Theatre. He spoke on “The Relation of the Bible to the Nation”. His address was very interesting and very fine and quite orthodox in its main argument, although here and there he deviated into some heterodox ideas. But he gave the Modernists some pretty hard hits and came out squarely against Evolution, particularly the evolution of man. His insistence that morality has its root in right relation to God was especially good! He will deliver a series of lectures in Kitchener every day this week till Thursday inclusive, but I don’t think I will get down to hear any more of them. Yesterday afternoon the Brotherhood of First English Church held their annual picnic on the river flats near Conestogo. Dr. Maurer gave Dr. Zinck and myself special invitation to go with them and came for us with a car. When we got out there the main feature was a soft ball game. Drs. Zinck and Maurer did not play, but I played nearly all afternoon and made the most runs of any man on the team. As a result I felt stiff and tired to-day, and still feel the effects of it a little. But I went down to the park this afternoon and swam across the lake and back and felt wonderfully refreshed. I don’t think there is a better remedy for a physically tired feeling than a swim in cool water.

Dr. Klaehn, Chairman of our Synodical Adjudication Committee was around Friday and informed me that we were to meet with the Canadian Conference of the

Missouri Synod at Zurich Aug. 20, and that he had received assurance from the Missouri pastors that we would meet with a cordial reception from them. This is rather a surprising attitude for the MO. brethren to take, especially in view of the fact that Dr. Pfotenhauer President of the MO. Synod will be present. I told Dr. Klaehn that, if at all possible, I would be present. On Thursday Evening of last week Bonnie pulled off her entertainment of the Zinck’s and their company. It was a big undertaking; but turned out a great success. Bonnie had Miss Susana Berdux to come over and help her serve. Monday (to-morrow), I am getting a woman to come in and do the wash as Bonnie wants to clean up and get ready for Bikle and family whom we expect on Tuesday according to a letter I received from him last week. Bonnie made two lots, white and pink, of the [?] you brought, I don’t recall the name of it- and she said it couldn’t have turned out better. She made some last week also that turned out well – and all without the marble slab. Little Catharine still speaks now and again of grandma and recognizes your picture above my desk every day. Herman had an advance of 5₵ and hour in his pay last week. He now gets 20₵ an hour and is proud of his raise. I am still contemplating taking a fishing trip up north, leaving Toronto on Monday, Aug. 10. This week will be a great week in Kitchener and Waterloo as it is Old Home Week. They had [?] [?] 4 out at Dr. Maurer’s picnic last Saturday. I had about 3 bottles of it. We have made arrangements to bunk Bikle and his family in the Seminary when they come. Bonnie has canned about a dozen jars of raspberries so far but practically nothing else. Carolus secured a new art student for the College last week. But I must stop here. With love, I am 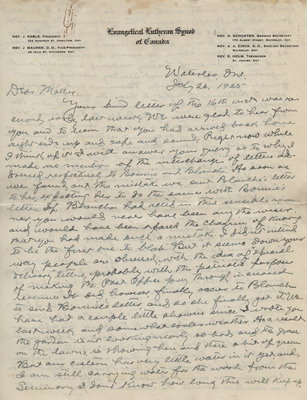