As I am somewhat at leisure this afternoon, having finished my Bible reading and with nothing else especial to do, I have concluded to write your letter without waiting for the night to come on. This will give me opportunity for some games after supper. I was down at Bridgeport this morning where I preached. I had a good congregation out for that small Church – about 50 I suppose – and found it easy and rather enjoyable preaching. It is not very hard on me to preach once a Sunday, as I can readily get up one sermon on Saturday, but then it comes to more than that it is rather trying. The only draw-back to preaching at Bridgeport is that it is not very remunerative. They pay only $5; but as it costs only 12₵ return trip by street car, it is still worth while and helps me to get through the month till the next pay-day. With the preaching that I have had lately I will be able to get through this month better than usual. Carolus is up and around now and his pox are slowly disappearing. None of the other children have taken the disease as yet or shown any signs of it, so that I am hopeful that there will be no further outbreak and that within the next ten days we will again be out of quarantine and the children will be able to get back to school. This is the

worst feature of the whole situation, that they lose so much of school. Herman has had to stay at home too, which is putting him back in his college school work. But he is doing some studying at home and I hope he will still be able to make his examinations, which I think he will do if no other cases develop. I am satisfied that what Carolus had was chicken pox, though the father of the Kitchener boy was sent last week to the Isolation Hospital with what the authorities over there pronounced small pox. I rather think that they were mistaken in their diagnosis. We have been having real spring-like weather for the last few days and the snow has been disappearing rapidly, leaving much mud and slush on the streets. Last night we had a fairly heavy thunder storm with vivid flashes of lightning – rather remarkable for so early in the season and rather indicative of colder weather to follow. It is likely we will have some snow yet and now and then a cold snap; but the back of the winter is broken and we can look hopefully from now on toward spring and warmer weather. From Cecile’s letter to Marion we infer that Herbert has secured the services of Mrs. Murray as housekeeper. This, I think, is as nearly an ideal condition as he could secure providing Mrs. Murray is strong enough for the ordeal. She will be good company for you and quite companionable and will be a fine influence for Herbert’s children. Remember me kindly to her. Things are moving along nicely at the Seminary. I had one examination last week and am having another this week. I will then have finished up two of my subjects, which will make my work a little lighter and give me more time for the study of Philosophy, in

which I am interested at present. Bonnie had a nice velvet dress made just before we went into quarantine, but has had no opportunity to wear it and is afraid that by the time the quarantine is lifted it will be too warm to wear it. However, it will save till next winter if the style doesn’t change to fundamentally. Bonnie is getting to be quite expert as a dress-maker herself and made a beautiful dress for Marion recently. Just now with all the mud outside she is having the job of her life to keep the house clean. She gives lessons to the children in music – Carolus and Marion on the piano and Herman and Arthur on the violin. Herman can play “God Save the King” already. My cider barrel, I am sorry to say has gone dry and I have only two bottles of beer left. I think I will save these for my birth-day celebration. I still have about four gallons of extra-fine Elderberry blossom wine. We will soon be not quite as dry here in Ontario as the legislation legalizing 4.4% beer has passed the parliament. This will give us a palatable drink which will quench thirsty throats to some extent. Bonnie says she is going to get me a good pipe for my birth day, so that, all things considered, I have no cause to complain. Well, I must close here. With love and all good wishes, I am 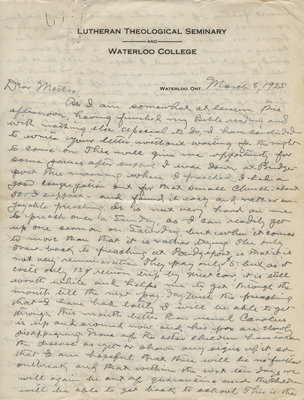