As I am going down to Brantford to preach early to-morrow morning and will not get back till late to-morrow night, I have concluded to write you a short letter this evening. After a week of rather steady winter weather and a new fall of snow we had a rainy day to-day, which has taken most of the snow away and which may indicate a break in the winter, though the prognostications call for colder weather to-morrow. I am enclosing in this letter a clipping from the Daily Record, Kitchener, which will show you that our affiliation project with the University of Western Ontario went through without a hitch. In consequence of this we are now a full-fledged College and can give all students completing our course all the degrees given in Canadian Universities, together with the honorary degrees that are usually conferred. This is a great step in advance and should result in a large increase of arts students in our institution from next year on. Dr. Potter is the one to whom the credit for this step is most largely due. He is a small man but alert, active and ambitious, and whatever he goes after he generally gets. We appointed him and Prof. Zinck as our representative on the University senate. We all feel highly elated that we are now in position to offer to our students all the advantages of higher education that can be attained anywhere.

There seems to be an epidemic just now around here of grippe, or a mild form of flu. Quite a number of the boys were down with it a day or two last week, Carolus and Herman took it yesterday and were lying around all day to-day and Arthur also had a touch of it, but didn’t give up and kept his paper route going. It affects the stomach and makes them feel logy all over, but is I think, nothing serious. Carolus went down to work this morning but soon came back and had been in bed all day, but is feeling better to-night. Marion seems to have a slight attack of it too, but not sufficiently to keep her off her feet. I had the boys to take physic and Carolus is considerably better and I think Herman is beginning to improve. The other children are all able to sit up and eat. I think they will be all over it in a few days. I have been rather busy to-day getting up my sermons for to-morrow. Teaching all week I have little time left for sermonising and have to concentrate it on Saturday. However, I always like to do some preaching, partly to keep in practice and largely to supplement my salary and make it reach out the month. I will clear $10 to-morrow. We observed the Day of Prayer for Colleges and Seminaries Thursday. Dr. Sperling gave us a very fine address, which the students seemed to appreciate very highly. Prof. Zinck and wife gave a Tea to the Faculty and their wives on Tuesday evening of last week. Unfortunately Bonnie was unable to be present on account of a heavy cold which she had at the time. Since then, however, she has fully recovered. Arthur bought his wheel this week and is paying for it on the installment plan. He expects to have it paid for in about eight weeks. Well, I guess I will have to stop here. With love to all, I am 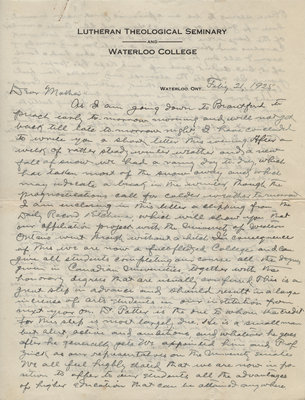