Your letter of the 5th came duly to hand. I was glad to get it and especially to have the account of grandmother Little’s funeral and her exact age. I was glad also to hear that Herbert had succeeded in getting a housekeeper and I sincerely hope that she will prove satisfactory; for it will be hard enough for him to get along and bear up in any case. He is very fortunate, however, to live so near you all that he can have the benefit of your invaluable assistance. I am sure little Franklin enjoyed the birth-day cake you made him and the good dinner. I have just written Herbert a letter – which I should have done long ago – in reply to his letter giving an account of Bessie’s sickness and death. Bonnie thinks you have a good memory to remember the exact spot of that snow-pile in which Eileen is standing in the picture. To-day I am at home for the first Sunday for some time. Next Sunday I am to go to Brantford. We have had fine steady winter weather this last week with a little snow and considerable wind. I spent an hour yesterday shoveling out that same snow-bank yesterday. But to-day it is considerably milder again and the snow has been melting. It is bright overhead and rather nice to be out, but somewhat sloppy under foot. My coal is holding out very well and I think I will have enough to see me through the winter. If so I will have saved about 3 tons over last winter, attributable to some extent at least to Hirtle’s house. I am going to have the three fir trees between our

place and his house removed. They are no longer necessary for protection and are not noted for their beauty and prevent the grass from growing under them. I think this will add somewhat to the appearance of the place. Carolus is still working Saturdays and a couple evenings at the baker's and is seriously thinking of taking a job with him through the summer driving a Ford delivery truck. At the recent election of officers for the Literary Society Carolus was elected pianist and appears to be quite proud of his position. Herman is taking to violin and can play a couple pieces already. He practices regularly about an hour a day. Arthur doesn’t take as much interest and would rather be out at play, but I think he will get there by and by. He is still engaged in paper peddling and makes from $2.50 to $3 a week. He is at present putting money aside for a wheel, which he can get for $20. He says when he gets that paid for he is going to assume the electric light bill and pay for the electricity every month. He will do it too; for he is by all adds the most generous fellow you ever saw. Marion’s bad eye is improving considerably from what it was. She can now read fairly fine print with it.. I am encouraging her to give it exercise by holding the other eye shut. In this way she may in time be able to bring it to normal. She doesn’t cough as much this winter as other winters, but will have to have her nasal operation next summer. She had a pretty bad cold this last week and stayed home from school one half day. She doesn’t look very well, however, and is quite thin. This is due partly to the fact that she has an abnormal appetite, especially for sour things, such as vinegar and pickles. On Tuesday of this week our Board of Governors will meet to take action on the proposed affiliation with Western University. As the Governors of the University will meet on the following day , our

affiliation is likely to be an accomplished fact by the time my next letter to you arrives. This will be fine for me , as it will enable me to educate my boys with full university degrees without sending them away, which it would be impossible for me to do under present circumstances. Perhaps you have seen in the papers that we are to get better beer under the prohibition act here in Ont. as a result of the close vote in last election. “The Speech from the Throne” threw consternation into the prohibition camp by announcing legislation increasing the percentage of legal beer from 2 ½ to 4 2/5 %. It is practically certain as the bill cannot be defeated without precipitating another election, which the party in power, of course, does not want. We have the English custom here that if any Government measure fails to go through the party in power must go to the country. The concession, while not as great as desired, will be very acceptable to there parts as a move in the right direction. I still have on hand 4 bottles of my brew made last October and still have also some cider in my barrel but don’t know how much. I must tell you a joke the Toronto papers got off on our wet town. They said when the returning officers from Waterloo were counting the ballots, after they had counted about 50, all wet one of them came across one marked 'dry'. He laid it aside and resumed counting. When he had counted about 50 more wet votes he to his astonishment came across another marked ‘dry’. He took it up and looked at it for a moment and them tore it up saying as he did so, “The scoundrel has gone and voted twice.”

Thursday of this week we will observe as College and Seminary Day according to the prescription of the U.S.C.A. I succeeded in getting Dr. Sperling to address the students on the occasion. I heard indirectly that the Rev. P.C. Wike was applying for the Morrisburg parish. It seems that when they get away from Canada, sooner or later they always want to get back. However, they say he is quite deaf or rather very hard of hearing, which will probably knock him out. Otherwise he would be a good man. Robert and I have been playing chess again lately. At present he is champion in the game. Well, I will have to come to a close sometime and perhaps this would be as good a place as any to stop. With love to you all and all good wishes I am 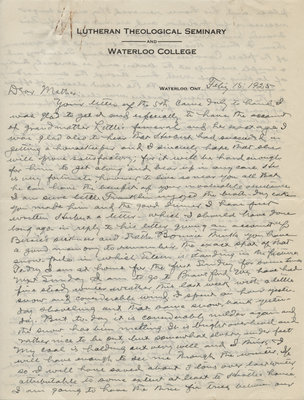