Creators
Carroll Herman Little, Correspondent
Candace Little
, Recipient
Media Type
Text
Item Type
Correspondence
Description
Handwritten letter from Carroll Herman Little to his mother on February 8, 1925. Little discusses family life with wife Bonnie and their children; his work as a Lutheran pastor and faculty member at the Evangelical Lutheran Seminary of Canada in Waterloo, Ontario; the decision to affiliate the Faculty of Arts with the University of Western Ontario; and the death of his paternal grandmother.
Notes
Carroll Herman Little (1872-1958) was a Lutheran pastor, and a professor and administrator at the Evangelical Lutheran Seminary of Canada (later Waterloo Lutheran Seminary; now Martin Luther University College) in Waterloo, Ontario.

I have just got back from Bridgeport where I preached this morning, have had my dinner and am enjoying my after-dinner smoke; and as this puts me in a soothing state of mind I have concluded to utilize the opportunity thus afforded for writing you. We have had a week of unusually mild weather for the season of year. For the last two or three days the snow has been melting rapidly and on the hill-top all around the dry land has begun to appear. To-day is particularly mild and the water is running in streams from the melting snow. It is also bright and sunshiny and gives promise of the coming of spring. This is quite welcome after a January of unusual severity. But it is too early yet for the winter to clear up and we will likely have some touches of winter still. The prolonged stage, however, is doubtless over and whatever comes after this will probably be intermittent and will only add to the spice of winter. I received Pearl’s card early in the week announcing the death of dear old grandmother Little. Her death was not a surprize as little else could be expected at her extreme old age.

Nevertheless I felt sorry that she was gone, adding another to the near and dear ones who have fought the good fight of faith and entered into the rest that remaineth to the people of God. I think too that she should have been buried at St. Peter’s by the side of her husband and am rather surprized that any of her children, even those living around Troutman’s should have considered anything else. But aside from sentimental I suppose it doesn’t make a great deal of difference. She was a decant faithful old woman. Requiescat in pace!

Just at this point Prof. Hirtle, our next door neighbour, came in for a friendly visit and spent a couple of hours. Consequently I had to let up on this letter. This I was the more disposed to do as visits from any of that crowd are about as rare as hens' teeth. And even to-day he came alone and left his harem at home. They are the most exclusive set you ever saw; the women in particular never go out anywhere, and to-day is the first time he has been around since school opened in the fall, although both Bonnie and I have been over there two or three times. They have this virtue, they are neighbours that don’t bother you. That is a good deal better than some of the borrowing neighbours. The Hirtles are very proud of their new baby and think she is about the only thing that ever happened, which is as it should be. The affiliation of our institution with Western University is proceeding at full speed. The articles of affiliation were accepted by our Faculty last week and Dr. Maurer has called a special meeting of the Board for Feb’y 17 to ratify the agreement which we have reached.

It looks as though the matter will go through with flying colors, although Dr. Hoffmann is beginning to get cold feet over the proposition. He is afraid the accentuation of the College will be at the expense of the Seminary and that as the Canada Synod is not particularly interested in Higher Education but only in Theological Education, it will affect their support of the institution. But I think his fears are groundless and that any loss that might occur will be more than made up from other sources. I am sure in the long run the result will redound to our Seminary: credit as it will virtually put a stop to our turning out of half-baked ministers. I am kept pretty busy with my work and study these days and with my occasional preaching. The past two or three weeks I have been studying Philosophy on my Chicago Seminary course and find it very interesting. I have completed fourteen of twenty-three courses and have credits on all the rest, but one. Carolus works two evenings a week and all day Saturdays at the bakery. He is getting to be quite an expert baker and Bonnie is afraid he might take that up as his trade. She would naturally like to see him aim higher. But I don’t think there is any danger. He does this in order to have a little spending money which I can’t give him. He earns in this way from a dollar to a dollar and a half a week, which is about all that he needs to or should spend. Catharine has arrived at the stage when she can open doors and is so proud of her accomplishment that she spends

a great part of her time in going up the front stairway and down the back. When she is not employed in this way she is engaged in unlacing her shoes and taking them off and lacing them up. Sometimes she makes a raid on the shoes in the closet and plays havoc with all she finds there. I was glad to learn from Pearl’s card that Herbert was getting along fairly well with the help he receives from home. I would like to write to him, but it seems hard for me to get around to it. But I often think of him and my sympathy continually goes out to him in his loss. Well, I have already transgressed my accustomed limits and will close. With love and all good wishes to you all, 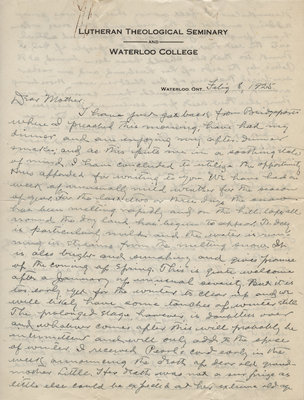