I had intended waiting till to-morrow to write to you, but this afternoon Dr. Willison phoned over and asked me to go to Brantford to-morrow in his place. It was rather short notice to get up two sermons on but I consented to go. And as it will be too late to write after getting back home to-morrow night, I have concluded to drop you a few lines to-night. I must, however, necessarily be brief. I didn’t have your letter by me when I wrote you last week and consequently forgot to say anything about what you said in reference to Mrs. Murray and her experience in the hospital. We know the nurse quite well. She is a Mrs. Stewart – a young widow from St. John’s congregation who went over to Pittsburgh last fall to study to be a nurse. Before going away she was a clerk in Bricker, German & Co’s store down here on King St. The New Year was ushered in by a midnight service in St. John’s. I did not attend, but Carolus and Herman did. I was down at service on New Year’s day and also took part in Pastor Maclean’s funeral in the afternoon of the same day. So I think I started off the

New Year fairly creditably in a religious way. As we have heard nothing more since Pearl’s card about Bessie I presume there has been no decisive change in her condition. I hope she is improving by this time and will soon be on the road to complete recovery. But I take it from Herbert’s letter that the Doctors don’t have a great deal of hope. It seems strange that one so apparently healthy and strong as Bessie was should be stricken in this way. Kindly have some one to keep us informed of any change in her condition as we are anxious about her. Last Sunday when I went down to Brantford it was 8° below zero and when I came back it was 10° below. That was the coldest day of the winter so, but it was bright and clear and I didn’t mind it at all. To-day it is much milder and has been snowing all day. We have great quantities of snow now and I have had considerable shoveling to do. We have had very steady winter since the 18th of December and it has taken a lot of coal to keep the house warm. Our holidays will soon be over. We begin again on Tuesday and will have a long stretch till Easter. The Hirtles are expecting their baby sometime this month. Mrs. Hirtle hasn’t been outside the house for a long time. Marion mailed a letter to Cecile to-day, which no doubt conveyed what little news there is. So I will stop here for this time. With love and all good wishes for the New Year, I am 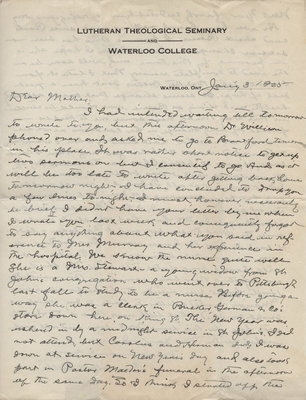