Creators
Carroll Herman Little, Correspondent
Candace Little
, Recipient
Media Type
Text
Item Type
Correspondence
Description
Handwritten letter from Carroll Herman Little to his mother on December 27, 1924. Little discusses family life with wife Bonnie and their children; his work as a Lutheran pastor and faculty member at the Evangelical Lutheran Seminary of Canada in Waterloo, Ontario; the family's Christmas celebrations, including the tree, presents and dinner.; the Kitchener-Waterloo community Christmas celebration which featured a parade, tree, and the distribution of 2,000 Christmas stockings.
Notes
Carroll Herman Little (1872-1958) was a Lutheran pastor, and a professor and administrator at the Evangelical Lutheran Seminary of Canada (later Waterloo Lutheran Seminary; now Martin Luther University College) in Waterloo, Ontario.

As I am going to Brantford early to-morrow morning and will not get back till late to-morrow night, I will write you my weekly letter to-night. In the first place allow me to thank you most heartily for the very generous contribution toward our Christmas cheer. As my cheque had not as yet arrived your $10 came in for immediate use and enabled me to do considerable in the way of providing presents for the family. Soon after your letter arrived the other letters of which you gave intimation began to come in. Bikle sent a cheque for $50 – a most extraordinary present. I have heard of only one other like it and that came to Dr. Potter from his mother. Clarence sent me $10, Herbert $10 and Mabel and Pearl each $5. Of this I applied $70 on my stove and intended to put it all toward that in a month or so. But as I had run up several bills on Christmas presents I thought it best to pay them off first. My purchases along this line were a little heavier than usual due to the fact that some of the children wanted useful presents. Herman and Arthur for example had their hearts set on violins. And while I got them only beginners instruments they cost about $7 apiece. Herman and Arthur have been anxious for some time to take up violin and said they would practice if I should get them. Robert wanted a Bible of his own, and as I liked to encourage this

trait of character I got him a very nice for $4.00. Marion had to have a pair of shoes and skates which cost over $5.00. Then there were presents for the little ones, and for Bonnie, and candies and nuts and Christmas tree trimmings, etc – all of which took money. I have written to Bikleˊ and Clarence and Herbert thanking them for their generosity and considerate thoughtfulness. I take this opportunity of thanking Pearl and Mabel most heartily for their kind and liberal gifts. I should write them personally but am not sure whether Mabel is still at home or not, and besides I have had so many gifts and greetings to answer that I cannot get around to any more this week, especially in view of preaching twice to-morrow. It seems to me that I have a wonderfully fine lot of brothers and sisters, and I am quite proud of them all. Bonnie gave me a present that I appreciate more than anything else. She slipped off your fine photograph for a few days before Christmas and had a nice frame put on it. As she has excellent taste the frame brings out the picture gracefully. I have my good kind mother’s face now always in front of me as I sit at my desk and read or write or work. It will also preserve the picture so that it will always keep nice. We had a fine Christmas tree at home, lighted it up on Christmas eve and had a little service and distributed the gifts. Carolus presided ably at the piano. When Herman and Arthur learn to play the violin we will have quite an orchestra here. The children remembered me with cigars, so that from Christmas to date I have had plenty to smoke and when that became dry I drew on the cellar for liquid refreshments. The Community Christmas tree on

the afternoon of Dec. 24th was a grand affair. The tree which was one of the most symmetrical I ever saw was beautifully decorated. Santa Claus arrived in his big red sled drawn by grey horses and Cinderella came in her car or big float, while clowns on horses, real and imitation made fun for the crowds. Some 2000 stockings well-filled were distributed, of which we received six. On Christmas morning I attended early service (8 o’clock) at St. John’s. I did not attend any of the Sunday School or children’s celebrations. They occurred in the evening and that is Bonnie’s time. So I left it to her and without any regrets as I always find them more or less tiresome. On Christmas day I finished reading my N.T. through for the 16th time this year – the 103rd since I have been keeping record. We had a big goose for Christmas dinner. It weighed 13 lbs. and to give you an idea of the healthy condition of the family, we consumed it all but the bones at the one meal. We have had real winter weather all through the holidays, at times exceedingly cold and very windy. To-day, however, the wind died down and though the temperature was not much higher we didn’t feel it so much. I kept the house warm - almost hot, but have used a lot of coal in the last week. The children are all enjoying their vacation and the Christmas holidays and are as happy as larks and as noisy as crows. But I must close. Wishing you all a blessed and bright New Year, 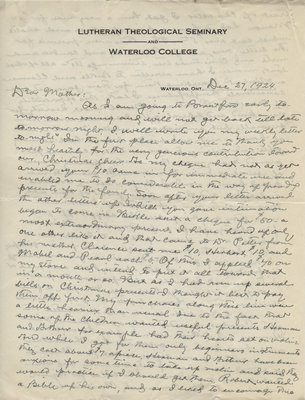