As I am not particularly busy this afternoon I will seize the opportunity thus afforded to write you a few lines again. October has come and gone. It sustained its reputation of being one of the finest months in the year in this latitude. It was fine and warm and dry throughout this year. November bids fair to be much rougher. It opened up yesterday with a heavy wind, but still fairly warm. To-day, however, was cold with snow-flurries off and on at intervals. As all the leaves are off the trees now we may look for fairly cold weather from this out. I was down at St. John’s to Church this morning. The pastor preached a Reformation sermon from the text Jer. 13:23. But it was rather from the text than on it; for he never referred to it or quoted it after he announced it. His sermon was all right as far as it went, but was altogether too negative, consisting of nothing but a denunciation of the Roman Catholic Church. Personally I didn’t get much out of it as I was convinced before he began that he Catholic Church is ein Mahr und ein Parder i.e, an Ethiopian and a leopard. To-night our next door neighbour Prof. Hirtle will hold forth. Bonnie and the boys will go down, but I will stay at home and keep house. To-night there will be a joint Reformation service at Preston, the congregation of the United Canada Synod at Hamilton, Kitchener, Guelph, Hespeler, Galt and Preston taking part in it. Prof. Zinck is to be the chief

speaker. Next Sunday evening there will be a mass-celebration – not a celebration of mass – of the Lutherans in Kitchener and Waterloo in the Lyric Theatre of Kitchener. Dr. Wentz of the Gettysburg Theol. Seminary will deliver the address. I heard him once. He is quite a brilliant speaker. The Faculties of our Institution are to have positions of state on the platform and it will probably be a memorable affair. The delegates of the U.L.C. Convention are all back again, though I haven’t seen Dr. Maurer as yet. But I saw Dr. Oberlander who stopped over here with his sister, mother of our Dr. Potter, on his way back to New York. He was enthusiastic over the convention, but as he belongs to the General Synod wing I took this commendation cum grano solis. However, I trust it was a successful convention. Our work in the Seminary is progressing. I was reminded of this fact by the calling of a joint faculty meeting the other day to fix the time for the Christmas recess. Owing to the date in the week on which Christmas falls we will have two full weeks of holidays this year; but I guess we can stand it. But really I am never happier than when I am engaged in my regular work. I have just finished reading the O.T. through this year, the 12th time in ten years. I am on my hundredth time for the N.T. in the same period; and have besides read the Greek N.T through twice this year, making the 23rd time since 1901. In addition to this I have done my regular work and read many books along theological lines. I am at present wading through a German work on Biblical Theology of quite an extensive scope. So you see I manage to keep busy. Tuesday will be your big election day. I hope you will be more successful than we were on the 23rd of last month. I suppose you will vote for Davis. He is the best looking man of the bunch; but I think La Fallette is the ablest and the smartest. The impression over here is that Coolidge

is President only in name, Melon being the power behind the throne. Coolidge will probably be elected, but he is probably the weakest President the U.S. ever had. To-morrow a week will be our Thanksgiving Day. It too will be a holiday. The S.S. Convention has been fixed for Guelph that day, but I don’t think I will attend. I think I can celebrate better elsewhere. Out little Catharine can run and walk and go up stairs as well as the other children now and can carry a load as big as herself. She can call all the children by name and play in their games of hide and seek and say ‘ready’ with the next one. She is a beautiful, affectionate little thing and is of a very happy disposition. Dr. and Mrs. Willison just phoned and proposed to take Bonnie and me to Preston to-night. The invitation was such a surprise that we decided without loss of time to accept it and go. Well, as we will have to get an early supper and it is getting late, I will close for this time. With much love, I am 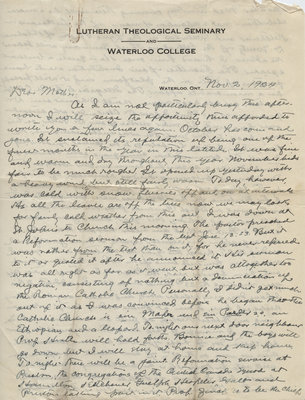