I am on the point of starting to Toronto this afternoon and will endeavor to give you a few lines before I go. We have been having warmer weather since I wrote you last week. It has in fact been real summery, though the nights have been cool and pleasant. Last Sunday it was real hot in Hamilton and I almost sweated my clothes off, though they said it wasn’t so hot here. I imagine you are having some scorching weather down your way by this time. We have been having plenty of corn out of our garden since the first of this week. As all of the children like it we have from 45 to 50 ears at a meal. The baby eats the corn as clean off the cob as any of the rest and generally makes way with three ears. She is developing also in other ways. She doesn’t walk alone yet, but walks around the walls, pushes chairs, catches hold of my trousers and walks along after me and pulls herself up by everything she can lay her hands on. She understands everything you say to her and calls several of the children by name. She is a great father girl and always helps me to put the children to bed. She is also very fond of beer and has to have her drink every day. I have been selling

a little corn this week and have given away messes to all the neighbours. I could sell a great deal more if I had it, as my corn is always in great demand. But as my patch is not as large as usual I didn’t want to rob ourselves and so only promised to let one or two families have corn. Wednesday night our Horticultural Society held its fair. I had corn, beans, carrots, onions and English marrows on exhibition. I took 2nd prize on English marrows, which amounted to the munificent sum of 25₵. I always manage to rake in that much every year. The floral display was magnificent at the show. I think I will try my hand along that line next year. Our professors are rolling in from their vacations. Prof. S.W. Hirtle arrived from N.S. Thursday night and Dr. Willison and family from Muskoka yesterday.

I had Marion down to Dr. Henderson – eye, ear and nose specialist in Kitchener – last week. She has one eye that is defective in vision, but he said that it would not bother her to any extent and that there was no need of glasses. So she has dispensed with her spectacles. As to her nose, he made two examinations and said he would have to have an x-ray of the nasal cavity before treating the case. I will have to take her down to Dr. Lockner in Kitchener for this before long. I am somewhat dreading the expense of this, but hope it will not be as heavy as I anticipate. The public schools open up on Tuesday and vacation time will be over for another year. Well, I will have to close for this time. With love and all good wishes, 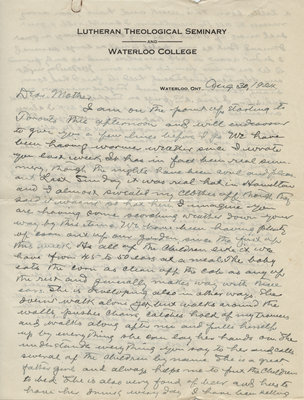