As I am leaving for Toronto this evening I thought I would drop you a line or two before starting as I will have little opportunity for writing while in Toronto. I will not get back till sometime Monday. Enclosed I am sending you a recent picture taken by Carolus of Bonnie and the two smallest children, Ruth and Catharine. You will note the striking contrast in their appearance. Ruth is pretty but her face is somewhat drawn up in the picture on account of the sunlight. The picture is taken on Jefferson St. just below our house and shows Berdeaux’s in the distance. It is a real good picture, I think. The Hirtles moved their goods into their house last week and left Monday for Nova Scotia where they will spend the rest of their vacation. Rev. Harry Wahl and Rev. Ephraim Huenergard, both graduates of our institution a few years ago are spending their vacations together with their families in Waterloo and vicinity. I saw Pastor Huenergard yesterday. He hails from Detroit. I haven’t seen Pastor Wahl yet. He has a parish in New York State. Last Wednesday or Thursday Eileen received a string of red beads from Pearl in Porto Rico. They were made apparently of berries that grow there, Eileen says she is lucky and is quite proud of her bright beads. We have had some rather warm weather since I wrote you last,

the thermometer on a couple days going up around 90, but the last two or three days have been nice and cool. We have occasional showers, but they generally come at night and do not bother us. We have had beans and other things out of the garden, but corn hasn’t developed sufficiently yet for eating. Bonnie has put up some sixty jars of fruit of all kinds. The little children are all over the whooping cough and Ruth is rejoicing over the prospect of going to Sunday School again to-morrow. I have finished my course of study on the Ante Nicene Fathers – read about all the books but the 8th volume which was not required. I feel that I know considerable now about the theology of the early Fathers. Well, if you will excuse this short note I will try to get it into the mail and you will get it a little earlier.

With love to all, I am 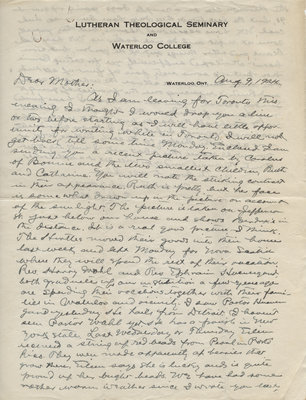