As I am going down to Preston to-morrow, where I am to preach both morning and evening I thought I would take time by the forelock and write you a few lines before I go. You will not get this any sooner as no mail is collected on Sunday, but I will at least have got the matter off my mind. I haven’t much news to write as everything has been going on about as usual, viz three meals a day, reading and study in the forenoon, study and reading in the afternoon and a swim in the park pond at 4 o’clock. To-day, of course, I have been pretty well occupied getting up my sermons for to-morrow. I will leave here in the morning and put in the day at Preston. Bonnie intends coming down in the afternoon and will come back with me in the evening. We had two or three warm days the past week, but tempered by occasional showers. To-day was fine and cool and pleasant all day. My garden is making fine progress. We had several messes of peas out of it last week, but now it and the radishes and lettuce are about over. Beans however are beginning to come in and will soon be plentiful enough. The corn is in tassel and the cucumbers in blossom and there are lots of green tomatoes on the vines. The season has been good

and everything looks quite promising. Our mulberry tree as you go into the garden is wonderfully full this year. We have been eating them in stews and pies, and I persuaded Bonnie to put up some for winter. She doesn’t think much of them, but put up six quart jars. I like them and so do most of the children. I have about 9 gallons of elderberry blossom wine on the go and it seems to be working out to perfection, but it won’t be real good before winter. This morning Prof. N. Willison, Litt D., started off with his family to their Indian camp at Muskoka. This will give us a chance at some of the cherries on the campus. He usually hogs them all though he has no more right to them than any of the other professors. The cherry trees are quite full this year.

Prof. Zinck has charge of First English this year during Dr. Maurer’s vacation. The latter is leaving with his family on Monday for Morrisburg. I had a surprise in a visit, or rather a call, this morning from a young man by the name of Willand from Morrisburg. He travels for an Electric concern and looked me up when he reached our town. I had a nice letter from Pearl last week giving an account of her situation in Porto Rico. Her principal pastime down there seems to be swimming. She used to try it in Nova Scotia but with no great signs of success. However, she claims now to be able both to swim and to float. Her perseverance has evidently been rewarded. I will try to write her again while she is down there if I can find the time. Bonnie and I were over at Dr. Maurer’s last night and spent the evening. Mrs. Maurer’s daughter Mrs. Julian lives with them and has a small baby. Dr. Maurer’s daughter Ruth also lives with them and his oldest daughter Anna was in from Toronto. So we had quite a crowd on. On Thursday I had a funeral for Dr. Sperling. He wanted to go away on his vacation and asked me to take it. It was that of a young woman not quite

18 years of age who died in childbirth from kidney poisoning. Her husband was also quite young and a Catholic. In the account of it in the paper I noticed the floral tributes concluded with so many “mass cards” by a woman from Kitchener. That was the first time I ever got mixed up with Catholic masses. It was a big funeral, the connection being large on both sides. The Hirtle house, next to ours, is almost finished. They expect to move in the middle of next week, and the week following they are going down to Nova Scotia to spend the remainder of their vacation. The children, Catharine and Ruth are getting better of their whooping cough at least they do no cough as frequently as they did. As it was vacation time we didn’t bother to get quarantined and I suppose it was as good a time for them to have it as any. An advertisement inserted in the Globe (Toronto) brought in 21 applications for the position of Instructor in the College and in less than 4 days a man was secured. This should put the College department in good shape for next year. Well, I have transcended the limits of my rope and will stop here peremptorily. With love to all I am Most Sincerely yours, 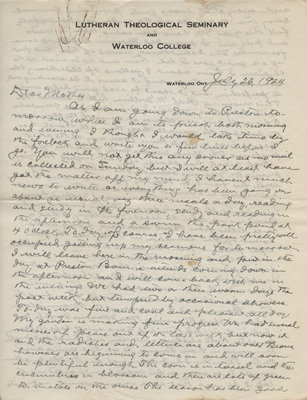