Your most welcome letter with its birthday greetings was received the day before my birthday. Thanks for the same and for the enclosure of one dollar for postage stamps, which, however, I didn’t use for that purpose. But the money came in good just the same. Always toward the end of the month I am down to hard pan as far as money goes and am generally for 8 to 10 days without a red cent. However, your dollar helped me out wonderfully this time and enabled me to meet my Church dues today for myself and family and considerably shortened my penniless period, as the cheque will be due on Tuesday. The minister preached this morning on giving, taking his text from the Gospel. From the fact that the disciples gather up more than they started in with he deduced the corollary that money given to the Church or to the Lord would not make people any poorer and conjured that if they would give $5 instead of the smallest coins the Lord would so bless them that they would have more after giving it than before. I like to give and would give a great deal more than I do, if I could; but I must confess that I am somewhat of a doubting Thomas as to that line of argument. The inference too seems rather far-fetched. Next Sunday morning I am to preach again in First English. In the evening

here at St. John’s the catechetical examination will be held. On Palm Sunday morning the confirmation will take place. Herman will be among those confirmed this year. He has done good work and I think is about the best in his class, though I don’t think Pastor Roberts is as thorough in this work as Pastor Bockelmann was. Enclosed I am sending you a few of Carolus’ snap-shots, as I promised last week. The picture of me was a time exposure taken inside, which accounts for its somewhat ghostly palidness. However, otherwise it is very good.

The father of the Professors Hirtle died at his home in Halifax last Monday. Both the Hirtles went home for the funeral, which had somewhat interrupted the work in the College. However I allowed Principal Willison to draw on the Seminary boys for help in the juncture and things are moving along fairly well. Mr. Hirtle was about 67 years of age but had been sick with heart trouble and dropsy for about a year. He was a good Churchman and a fine living man. The Hirtles will probably be out the best part of this week yet. The weather has been quite cold for the past three or four days with frequent snow-squalls and sparrow snows and I have in consequence been obliged to “keep the home-fire burning”, as they used to sing in wartime. I put on my last shovel full of coal this morning, but still have a half-ton or so of coke, which I hope will last the season out. That agent that took you in in the enlarging picture scheme must have been a pretty slick duck. I think $9.50 a very fair price for such a picture. If his girl is in London she is only about 55 miles west of here. I know several people in London, but have never been there, though I passed through the city in 1914 on my return from the General Council at Toledo, O. Bonnie bought herself a new dress and spring coat last week. The dress is brown

and real pretty and so dainty that I could stick it in my pocket and use it for a handkerchief or spectacle cleaner. But I can’t describe and shall desist from all attempt. The coat is about a fawn shade, perhaps a little lighter and is long in length. It too is quite pretty, but after trying it on at home Bonnie got it into her head that it was too loose, fluffy or baggy or whatever you call it and was quite displeased with her bargain. To-night she brought a dress-maker up with her from Church to get her professional opinion on it. I hope she will pronounce it O.K. For the coat was altered for her and I don’t imagine they will take it back. I have started studying the “Ante-Nicene Fathers” and find them very interesting, but as the Seminary work is increasing as we draw nigh the close of the year I will have to let up somewhat on outside studies and take them a little slower. I am enclosing our Doctor’s prescription for constipation, which various members of my family have tried out and found to work to perfection. I never had any trouble in that line and so can’t speak from experience, but Bonnie, who has had considerable, has found it to work fine. 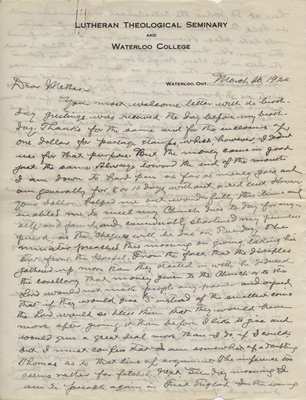