Just a few words again to-night. I have just got back from First English Church, Kitchener where I preached for Dr. Maurer. It was the first sermon I hadpreached for months – so long ago that I had almost forgotten how to preach, but I got through with it fairly well, as well probably as could be expected from the time I had for preparation and from the uninspiring size of the congregation. There were about a hundred out I suppose. I gave them a Lenten sermon on Rev. 3:19-20. I had, however, some distinguished individuals in my audience, 3 ministers, including Dr. Maurer and Principal Willison, 1 Professor and 1 Dr. of Medicine. I am to preach there again the first Sunday in April to help Dr. Maurer out. I was down at St. John’s this morning. Pastor Roberts took for his text, Matt. 4:1 and then announced that he wasn’t going to preach on the temptation of Christ, but on our temptations, which doesn't seem to me to be a very respectful way of treating the Word of God. However, after hearing his introduction I was glad he didn’t attempt to preach on the temptation of Christ.

Last Tuesday night we Seminary professors that belong to St. John’s went down and appeared before the Council of the congregation to settle our status

as members. There were various rumors going the rounds that we refused to support the local work of the congregation as we paid only on the red side of the envelope. We told them that that was the understanding we had when we joined the congregation, but that it was false that we refused to give for local purposes and that we were quite ready to divide our offering if it was so desired. The outcome was that we were to act as any other layman in the matter. The whole thing, I think, was due to Pastor Roberts’ attitude as nothing was ever said and no fault was ever found with the arrangement until recently. I think Pastor Roberts’ conscience smote him, for I received a note from him yesterday expressing regret for the occurrence and hoping that it would soon be forgotten. Personally I have no fault to find. In fact I have never taken any part in any of the congregational meetings on account of my dubious status and only attended one at the then pastor’s request since I’ve been here. However, I have now divided my offering and am giving enough on the local side to entitle me and my wife to a vote and I intend to take advantage of it after this if things don’t go as I think they ought.

The Y.M.C.A. of Kitchener have been having lectures every Sunday for several Sundays by the Dean of Semite Languages and Literature in Toronto University. He is one of the most radical of negative critics and has wholly removed the prophetic element out of the O.T. Scriptures together with the Pentateuch which is wholly a forgery. Next Sunday he is going to deal with Jesus Christ and it is pretty easy to imagine what he will do with Him. I intend going down next Sunday to hear him at first hand. I think it is a very

bad policy in the “Y” to bring such lecturers before the immature boys and young men who compose the organization. It can only result in the dissemination of skepticism of the most insinuating kind. I never did have much use for the Y.M.C.A. and have still less for it now. We are having it quite cold yet. The thermometer ranges around zero nearly every night, but the days are fine and bright and in spite of the cold the snow is going away gradually. The tops of hills are already bare though in my garden the snow is still 3 or 4 feet deep. Cutters are the only vehicles that pass as yet though the automobiles are getting nearer and nearer to the Seminary and will probably be able to make it in a few days. The Board is planning on putting up a dwelling for Prof. Hirtle next to us on Albert St., in which event I will have to give up about a third of my garden. But I will probably still have enough left to work. I still have a little cider left in my barrel, but it is getting extremely low. I’m afraid it won’t last much longer. I will soon start another brew of beer, which I don’t bother with in the winter time. Well, I must close for this time. With love to all, I am 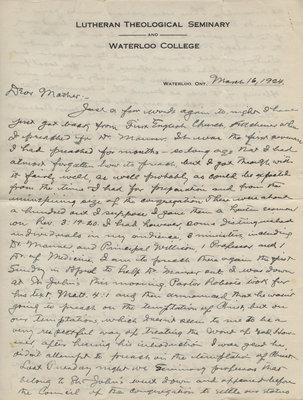