To-night I will try to give you a few lines again, although there isn’t much doing to write about. We have had a week of steady fine weather just cold enough to keep the snow from going, but also just sunshiny and warm enough to make the ice rotten. It stormed and snowed so much this winter that the boys never succeeded in getting a very thick coating of ice on the Seminary rink, and now it is broken through in innumerable places. It was fairly good on Friday night yet when I was on it for the last time but the children who went over to-day reported that it was absolutely “n.g.” So I suppose our sporting along that line is about over for the winter and we will have to look for some other kind of game. As Carolus traded off his magic lantern yesterday for a 22 caliber rifle, I think we will have to go out and look for Jack-rabbits or which there are some in this section. In the meantime to-day we played crokinole and some card games. Carolus went with me down to German Church this morning and as a Rev. Denison representing the British Bible Society is holding forth to-night I allowed all the children to stay at home and only Bonnie went down. She is not back

yet, so I haven’t received any reports from the seat of war. I have no objection to the British Bible Society as such, but I object to allowing non-Lutherans to usurp our Church service. Pastor Roberts received his training in the old General Synod and would be quite liberal if he were not somewhat held in restraint by his large and conservative congregation. He announced to-day a Prayer Meeting of the women in the Saviour’s Church (Anglican) and invited all the ladies of the congregation to attend. But there won’t be more than a half dozen go, and that will be the society bunch. I didn’t get my cheque yesterday and I have been without a cent of money since last Sunday. However, I borrowed $1 from Carolus yesterday, which fixed up our Church collections for to-day. The cheque will probably be here to-morrow. I think I will have enough coal and coke to see me through the winter, although the coal is getting rather low. But it won’t take so much from this out. This last week Ruth and Catharine had bad colds of a bronchial nature which sounded suspiciously like whooping cough, but they are getting over them now. The other day Arthur was talking about the stork bringing children when one of the older ones objected that the stork didn’t bring babies. Arthur said “I know, but that’s the way they express it.” Robert had an examination last week and he said he stood at the head of his room and that he made 100. Well, I must close. With much love to you all, I am 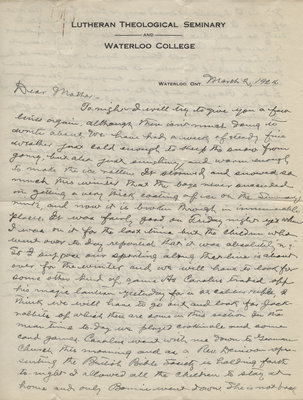